FILM at the Erie Art Museum celebrates the 50th anniversary of the iconic film A Hard Day's Night.

by Cory Vaillancourt
View ProfileFacebookTwitterGoogle+RSS Feed
July 9, 2014 at 7:15 AM 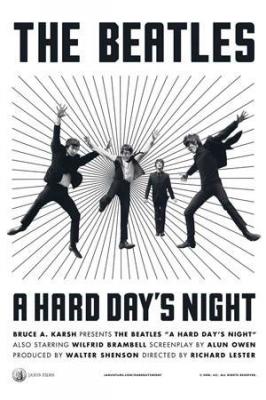 If you've been working like a dog when you should have been sleeping like a log, take a break by heading on over to FILM at the Erie Art Museum at 7 p.m. on Wednesday, July 9 for a little John, Paul, George, and Ringo.

"A Hard Day's Night features some classic imagery that had lasting effects on pop-music videos and cinema," said John C. Lyons, creator and curator of the popular FILM at the Erie Art Museum series. "The opening scene where the band is being chased by hordes of adoring, screaming fans stands out for me, as it's been mimicked in movies like Austin Powers as well as countless music videos. The film itself was strongly influenced by the French New Wave and comedic legends Laurel and Hardy, and it's a great snapshot of a time and a place in the world's history when these talented youth became royalty and reached an unimaginable level of cultural popularity."

Lyons said that bringing this re-released, re-mastered, re-Beatled flick to FILM is definitely a win for Erie. "Over the past two years I've formed some great relationships with the studios and distributors that get what we're doing here in Erie and really appreciate the audience and exposure we're giving their films," he said. "I think showing films one night per week, with discussion – essentially making each film we show a special event – is something they appreciate. It means we're doing our jobs here at the Film Society; Erika Berlin and board member Liz Nawrocki have put together some nice surprises for the evening's pre-party that I think area fans will appreciate." – Cory Vaillancourt