Finality You Want to Never End

After a two-year hiatus, Hello Kitty Death Squad has reunited for one final show to grip your musical soul, hold it in their hands and decide whether to crush it into pieces or send it flying into a musical afterlife. 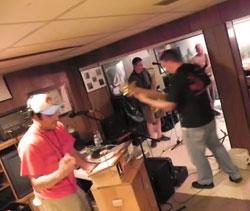 Pause for a moment. Listen to the world around you. Notice each voice, creek, drop, roar and peep.

Now imagine you can here the sound of every single molecule around you. The sound of existence in all of its brutal chaos and random beauty enveloping your mind and sending your body into an ecstatic response you have no control over.

This is the sound of Hello Kitty Death Squad.

On Friday September 30 you will have one last chance to experience everything their sound has to offer.

After a two-year hiatus, the band has reunited for one final show to grip your musical soul, hold it in their hands and decide whether to crush it into pieces or send it flying into a musical afterlife.

Either way, the band will be satisfied.

Born out of the ?incestuous? Erie music scene, the band began as a four piece instrumental group and soon blossomed into a mix of samples, sonic trance, lyrical trickery and ass shaking momentum.

They had immediate impact. A fantastic showing at a Battle of The Bands competition earned them studio time to record an album, which in turn earned them the first ever-presented Erie Rock Music Award.

The fury of success was short lived, and the ebb and flow of life and line-up changes held the band back. But only for a short time. Talent, experience, musical curiosity and an eclectic collection of songs pushed the band forward.

For the final show the current line-up will take the stage at The crooked i and provide a final performance for the ages.

?We wanted to bring some kind of finality to it,? said Garrett Skindell, a.k.a DJ G-Spot who mans the turntables, Theremin, keyboards, samples, percussion and all the bells and whistles. ?Going out and having it be the final chapter? the final curtain. I?m sure three, four, fives years from now we might all be in some other musical formation in some combination of members. But it won?t be called Hello Kitty Death Squad.?

There is little remorse in the group about holding a final show, more of an excitement for the opportunity.

?I?ve been in bands where we didn?t know it was going to be our final show,? said bass player Mark Waldinger, a.k.a Agent Z. ?You just come off stage one day and it?s done. At least now we get to play a real final show.?

It has been over two years since the band last played a gig. Family and other projects have kept the members from finding the time to come together.
?After the last show we would talk about getting together but it just never worked out,? said lead vocalist and sax player Doogie MacGregor. ?Then a year went by, then two? and we just never got back together.?

The impetus for a final show was prompted by the impending move of drummer Mikey ?Milky? MacGregor, who is moving to ?Some state beginning with an ?I?,? according to Skindell. The move gave reason and opportunity to reunite for one last blaze of glory.

?This band has gone through so many line-up changes that it would have worked to bring in a new drummer,? said Doogie, the least tenured member of the current group. ?But we felt this was a better time for a final show. All of us, except Garrett, have other projects going on right now.?

The musical chops of the band cannot be questioned. This is a collective of veteran Erie musicians. The tentacles of the band reach from the underground noise rock groups of earlier this millennium to award-winning high profile jam bands and all points in between. But nothing compares to Hello Kitty Death Squad.

There is no definition broad enough to encompass the full breadth and range of the sonic explosion that the band ignites.

?Of all the bands I?ve ever played in [Hello Kitty Death Squad] is the one that really created it?s own sound,? said guitarist Greg Szuba, who, along with bassist Waldinger is in the band One Less Enemy. ?You can never directly link this band to anything else really. As a guitar player I got to stretch out and experiment with all kinds of different sounds more than any band I?ve ever been in.?

The band wasn?t just a place for members to feel free to express new musical ideas, it was a challenge to play outside of defined roles and reach for a new kind of sound.

?I?d never ever played anything like this before,? said Joey MacGregor, saxophonist and lead zombie technician. ?Starting out it was really, really difficult. I had an idea of crazy madness music but I never got to experience it before. What I got out of this band was an approach to music where anything really difficult or hard isn?t because I can say, ?I can do this. I was in Hello Kitty Death Squad.??

This will be the final show for the band. There will be no gimmicky future of once-a-year reunion shows a la the Eagles or some such tripe. This is a chance for fans and first timers alike to enjoy a band that has already left a lasting impact on the Erie music scene.

Johnny James And The Absolutes, and the Jargonauts will join Hello Kitty Death Squad on the bill.

The show will begin at 10 p.m. at The crooked i, and when it is over your musical mind may never be right again. And that will be a very good thing.