Pennsylvania Republicans unleash a bull in a china shop. 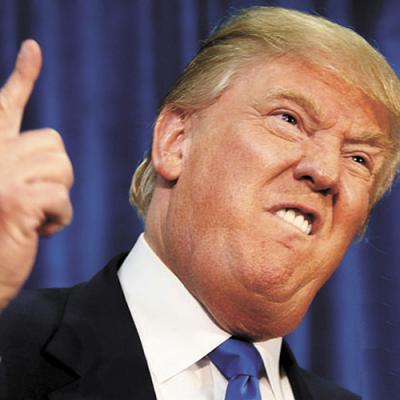 Without hearing his name, you know who he is. One way or another, you have a strong opinion of him. Which is unlikely to change despite the mount of gaffes on which he's building his free-speakin', tell-it-as-it-is, people-trust-me-I-have-a-solution-but-won't-tell-you-the-plan-until-you-support-me brand of politics.

Of the clown car of hopeful Republican candidates seeking the Oval Office, he's the lead clown, shoved into the spotlight by his own brazenness and the media's incessant obsession over him.

Why? He's the opposition to the norm. The rule-breaker because he's a self-declared rule-maker. He gets eyeballs. Keeps people talking. A supernova that refuses to fade away after enveloping the rest of the political galaxy surrounding him.

Ridiculing him, criticizing him, standing agape in awe at his ascension to the top has become akin to throwing kerosene commentary into his coal-swallowing furnace.

For American voters, that is.

Because he's also the candidate Republican senators "really want to go away" Bloomberg Politics' Sahil Kapur wrote in July 2015, adding that his "swift rise to the top of the GOP presidential field is not being regarded as a welcome development."

Kapur added that "Pennsylvania Sen. Pat Toomey paused for a long, awkward silence and looked down at the bright carpets in a Capitol elevator," when asked what he makes of this bombastic billionaire's lead in the polls. "'Not much,' he finally said." After taking another long pause to contemplate Kapur's question as to whether the real estate mogul was good for the GOP, Toomey responded "I'll have more on that for you later."

Luckily for Toomey, later is happening now. Friday, Dec. 11, in fact. In Harrisburg. Over lunch.

On Nov. 25, Republican Party of Pennsylvania Chairman Rob Gleason announced the headliner of the Pa. GOP Annual Commonwealth Club luncheon. In that press release, Gleason called He-who-must-not-be-named "a successful and dynamic businessman," and said that "we are excited to hear about his vision for the future of our country."

Of all the candidates in all of the world, why this one?

"The importance of Pennsylvania to the presidential campaign is clear," Gleason said. Having this particular candidate "addressing Pennsylvania Republicans puts us in the middle of the national stage."

And it puts folks like Toomey on the hot seat.

But Toomey's seat is already a bit warm. Perhaps the reason such a fireeater and firebreather is being brought in to drum up attention.

Irrespective of the temperature of Toomey's seat, it's up for grabs in 2016. While he first needs to win the primary election against security intelligence consultant Everett Stern, most known as the HSBC whistleblower, in the spring, he stands to face a strong challenger from the Democratic Party.

From the Dems, it'll either be Mayor of Braddock dark-horse underdog John Fetterman; former Chief of Staff to Gov. Tom Wolf, who also served as Secretary of the Pa. Department of Environmental Protection Katie McGinty; or former U.S. Representative Joe Sestak. And there's Joseph Vodvarka, who, according to his website, bills himself as "the Democratic Underdog that nobody wants you to hear about!" According to recent research, Nobody has been doing a good job upholding Vodvarka's motto.

But of Fetterman, McGinty, and Sestak, there's a lot of promise given that the race should be tight, interesting, and ultimately the producer of a stronger candidate forged by debates and press engagements. Regardless of who emerges, each would prove to be a real challenge to Toomey.

Which is made all the more interesting by inviting a bull to the china shop to hear his visions for the country and how they would affect Pennsylvania – if elected. Unfortunately, the Commonwealth Club Luncheon is off limits to the press, "following the many years of tradition," the release noted.

But at the risk of poor political prognostication, it appears that for the Pa. GOP, flash trumps substance. Although small talk during the luncheon might get awkward for Toomey, more awkward will be his conversation with the voters afterwards if he saddles up with the bull.