"Flesh to Touch ... Flesh to Burn!": Midsommar is Weird, Mind-bending and Strangely Funny 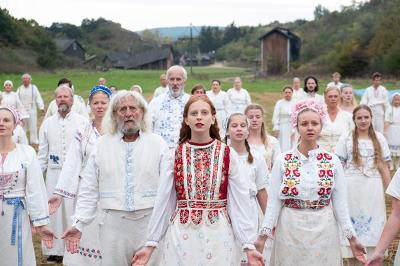 Ari Aster hit the film world hard with last year's Hereditary, one of the most audacious and terrifying debuts in history. It was a much-needed shot in the arm to the often formulaic world of modern horror. Needless to say, his follow-up Midsommar had a lot to live up to. Could Aster make lightning strike twice? While the film is as technically impressive, it doesn't quite reach the nerve-wracking and emotionally draining level as his previous film.

The film follows a young woman (Florence Pugh) who just suffered a horrible family tragedy. To help ease her mind, her boyfriend invites her to join his friends on a trip to Sweden to visit a friend's hometown and witness their mid-summer festival. She agrees to go much to the chagrin of the other friends. When they arrive, however, increasingly bizarre and terrifying events begin to occur around this idyllic rural community.

Much like Hereditary, this film is a technical triumph, with gliding, swooping camerawork and visuals that border on the psychedelic. Aster is so confident with his filmmaking that it's hard to believe this is only his sophomore effort. Also, the film makes great use of its sun-drenched, deceptively cheerful setting. Unlike Hereditary, though, Midsommar is often oddly funny with scenes going so far into the bizarre that it may elicit nervous laughter from the audience. It also has so many subplots going on that some of them get all but forgotten. That aside, Midsommar is a strange and entertaining head trip for those looking for a different kind of horror. — Forest Taylor