by Jay Stevens
View ProfileFacebookTwitterGoogle+RSS Feed
November 28, 2012 at 11:35 AM 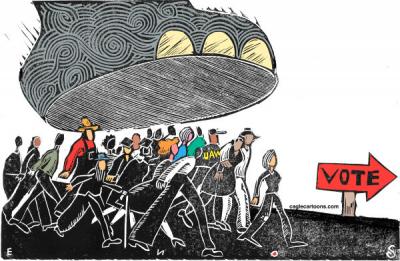 A Palm Beach Post report reveals what most of us knew all along: pre-election voter ID and other "anti-fraud" laws are not about preventing voter fraud, but about keeping likely Democratic voters aways from the polls:

'We've got to cut down on early voting because early voting is not good for us,' " Greer said he was told by those staffers and consultants.

"They never came in to see me and tell me we had a (voter) fraud issue," Greer said. "It's all a marketing ploy."

Jim Greer -- the former chair of the Florida Republican party -- is currently under indictment for siphoning off money from the party's coffers and is seen by many as an unreliable source. But his claims about the intent of the GOP's voter laws were backed by other Republican leaders, including Florida's former GOP governor, Charlie Crist, and a pair of Republican strategists.

What they're admitting has long been self-evident, since there is no connection between early voting and fraud. But their publicly admitting this illuminates how the Republican Party reacted after President Obama's election in 2008, in Florida and many other states. The cry of "voter fraud" was used to justify a range of sins against democracy, from cutting back on early voting and registration drives to unnecessary photo ID cards.

But passing voter ID laws in an effort to suppress (specifically) minority voting is not a new tactic for the GOP. Heck, it's only one tool in the GOP playbook.

Remember when Republicans purged the Florida voter rolls before the 2000 election? Then, they accused swaths of voters in minority-heavy districts of being felons and ineligible to vote, and hundreds, possibly thousands wrongly lost their vote -- a move that probably won George W Bush the White House and resulted in the Iraq War, torture, the destruction of New Orleans, and economic catastrophe.

And this May New York Times editorial reminds us of all the other tactics Florida Republicans have used to keep minorities -- likely Democratic voters -- from voting: cutting back on early voting, restricted voter registration drives, "cleared" voter rolls of "noncitizens"...and voter ID.

And voter ID wasn't spurred by the 2008 election, its floodgates were loosened by the 2008 Supreme Court decision ruling Indiana's voter ID law was constitutional, despite the majority opinion acknowledging it was "fair to infer that partisan considerations may have played a significant role" in creating the law.

Pennsylvania voters were spared the effect of this partisanship attacking our civil right to vote only by a court decision, but the law will be in place for future elections. Unless it's overturned. Which isn't likely under a Republican assembly.

Do Democrats pull their own shenanigans? I'm sure. They're as capable as playing dirty politics as anybody. But this particular dirty politicking -- uniquely Republican in nature -- attacks a fundamental right of Americans. Our vote. Voting is not a privilege. We should not need to prove our right to vote, or circumnavigate random obstructions to voting. (Incidentally, I'd inlcude registration deadlines under the category of "random obstructions." I mean, in this day and age of computing, why don't we have same-day voter registration everywhere?) This isn't just dirty politics, it's dirty politics that affects the very essence of our rebuplic.