Flower Crown, Wave Trails, and Barlow Come Back to the Rook 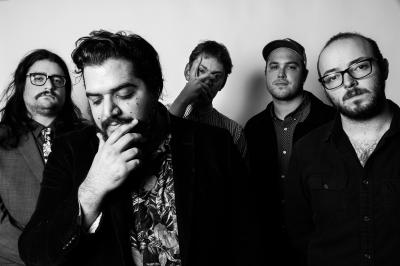 What does it sound like when a forest is felled? What sounds are heard as a valley is dammed and turned into a crystalline lake for human consumption? What is the musical equivalent of the Fukushima nuclear disaster changing the very Earth on which it was built?

Flash to three men holding hands at Cafe Club in Pittsburgh as they took the stage as Wave Trails on November 16.

"I'm listening to you," they said to one another before breaking apart.

Wave Trails is Cameron Fish, Ben Hyman, and Zack Hyman's attempt to answer these existential questions. The experimental psychedelic rock trio — consisting of Fish, lead vocals and guitar, Ben Hyman on drums, and Zack Hyman on bass — have spent years creating music that describes these events and the human impact on Earth.

The band began as a solo project by Fish, inspired by his father — a musician — and the daunting questions piqued by morality and youthful angst.

"What does that sound like as music?" he wondered.

"One day, I showed it to Ben in his car. Just these few songs I'd already recorded, and he was all about it," Fish said. After playing together as an acoustic duo for nearly two years, Hyman's brother Zack joined.

Years after their initial practices — which took place in Scott Park, according to Fish — Wave Trails is returning home to Erie from their current base in Pittsburgh to perform at The King's Rook Club later this month with Pittsburgh dream pop band Flower Crown. The band released their second full-length album, Sundries in May of this year and recently put out the single "High Fantasy" on Dec. 13. The shoegaze band Barlow will open the show, blending sounds of Guided By Voices and My Bloody Valentine into their own distinct sound.

It's a bit of an Erie homecoming for all three bands. Not unlike Wave Trails, Barlow began in Erie before relocating to Pittsburgh. Three of Flower Crown's five members have Erie roots as well, with the current lineup of the band coalescing after they had all also moved two hours southbound.

As for Wave Trails, don't be shocked if Fish and the Hyman brothers are MIA for the majority of 2020's early months. They're not booking any more shows until their new album is done. And to save you some time later, their stuff isn't on Bandcamp anymore, either.

"It's just never been a good example of how we sound," Fish said, continuing that it was time to take it down, though a recording of the entirety of a previous show at The Rook can be found on their YouTube page.

"That's the thing about recording for, or being recorded by other people. It's like you're under a microscope and you can't get comfortable with it," Fish said. "That's why it's important to record this (album) ourselves." — Hannah McDonald