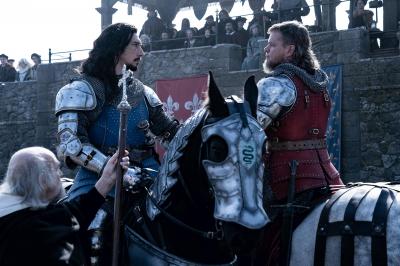 Ridley Scott's first feature, The Duelists was a period piece following a decade-long rivalry. Now the octogenarian is returning to familiar territory with his newest film, The Last Duel — but in this one, he's less interested in the conflict itself than he is with the recording of the truth. Particularly, the truth as told from a woman in a world where political, social, and religious customs all work to obfuscate her words. The result gives us a complex, multi-faceted character study capped off with an exquisitely filmed and edited action sequence.

The story is based on the true account of Jean de Carrouges (Matt Damon) and Jacques Le Gris (Adam Driver), two battlefield friends who turn bitter rivals after a series of legal and political maneuvers. However, their animosity reaches its boiling point after de Carrouges' wife Marguerite (Jodie Comer) accuses Le Gris of rape. Le Gris denies the accusations and de Carrouges challenges him to a duel to the death for his wife's honor, an act that may put Marguerite's own life in mortal danger.

Told Rashomon-style with three characters presenting their side of the same story, the film begins disjointed but becomes more fascinating as the conflicting stories reveal more pieces of the puzzle. It all comes together in the incredible final third as Marguerite, mostly a side character until this point tells her side of the tale. Scott and Comer both do an incredible job of presenting the hardships of a woman's voice being heard in an overwhelming patriarchal system. In the end, while set firmly in the past, The Last Duel says much about the social structures of this time as well.