For Servers, a Tipless Future?

One Pittsburgh restaurant is trading tips for salaries. Is this the future of the service industry? 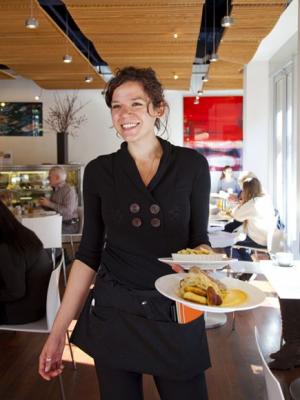 I have little room to wax on service industry topics. I spent one evening as a busboy to help out a friend, I slung green beer on St. Patty's Day in a downtown Erie establishment, and – I kid you not – I sold peanuts under the Big Top one humid Sunday afternoon between my junior and senior year of high school – humid and Big Top being the operative terms in that last clause.

I revisited my narrowly tippable past last week when I heard about a Pittsburgh establishment that is doing away with, well, tips.

Bar Marco announced just after the new year that it's wait staff would no longer accept tips. For those patrons that feel compelled to reward competent – and perhaps even above the line – service, their money will go toward the Food Revolution Pittsburgh Cooking Club, according to an NextPittsburgh.com article.

In this model of restaurantaurism, servers will be paid an annual salary of $35k for 40-44 hours of work per week, plus healthcare, 10 vacation days and 500 shares of company stock that vests at $1 per share after three months.

In exchange for stability, the restaurant staff will be required to take on additional responsibilities including attending bi-monthly finance meetings, Bar Marco co-owner Bobby Fry told NextPittsburgh.com. Each staff member will have a contract which lays out full employment terms with the restaurant.

I must admit that this arrangement leaves me somewhat conflicted. Most of the people I know who are career bartenders, servers, etc., have more than one employer, cobbling together the best shifts in the most lucrative establishments they can find.

In the Bar Marco model, however, the 40-44 hour per week schedule more or less precludes restaurant staff from maintaining multiple restaurant gigs unless, as Mitt Romney suggested during the 2012 campaign, they just get additional full time jobs to make ends meet.

The restaurant industry has often looked to be no less a boom and bust than the Texas oil fields, but my fiscally conservative friends tell me all things are cyclical.

Healthcare seemed to be the lingering question for one's ability to maintain such work, but the Affordable Care Act seems to have cured what ails many, if my read of social media over the past two years is correct.

But in this climate of rampant individualism, I wonder if trading the potentially lucrative "tips unknown" for the stability of $35k plus perks makes it all worthwhile?

In a bi-weekly paycheck scenario $35k per year translates to $2106.00 per month or approximately $27k each year for a standard withholding single person in the Commonwealth of Pennsylvania, according to the ADP.com online salary calculator.

Let's also not forget that the worst kept secret in the service industry: underreporting of cash income. In the salary model, this is an occupational relic.

So I wonder, is this the future of restaurants? Bad tippers be damned! Your server doesn't care what you think about the thickness of your alfredo sauce?

Are servers who may have walked out of an upscale restaurant with a couple hundred dollars in their pocket on a Friday night going to be content knowing that their two-week paycheck represents what used to be a few nights work? It seems a stretch in an pricey metropolitan area. It even seems a stretch in a more moderately priced city like Erie.

Then again, what do I know? I'm closer to being the bastard child of Jimmy Carter and P.T. Barnum than I am "Sam" from Cheers, but it seems like this deal will leave some folks working for peanuts.