Former St. Louis Rams center Jason Brown walked away from football to start his own farm and help feed the hungry. 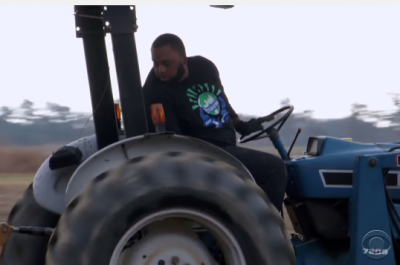 Jason Brown was a center in the NFL, and he was good at it. In fact, he was so good during his tenure with the Baltimore Ravens that the St. Louis Rams signed him to a five-year, $37.5 million deal in 2009, making him the highest-paid player at his position in the league at the time.

That signing was the highlight of his Rams career, however, as he couldn't quite live up to the hefty deal the team doled out for him, an all-too-common tale in professional sports. His yearly cap hit eventually made him a target, culminating in his release from the Rams when current coach Jeff Fisher took over in St. Louis in 2012. That didn't have to be the end of Brown's NFL career, as several teams showed interest in the then-29-year-old free agent, including a contract offer from the Baltimore Ravens, but Brown had other plans.

Instead of making a few more million in the NFL, the former center turned to farming. Brown had no idea how to farm back in 2012, but like many other people trying to figure something out on the Internet, he turned to YouTube. He eventually bought a 1,000 acre lot in his home state of North Carolina, much to the chagrin of some of his football advisers.

"My agent told me 'You're making the biggest mistake of your life,' and I looked right back at him and I said 'No I am not,'" Brown said in an interview with CBS.

While it's usually a bit surprising to see anyone turn down the large-dollar amounts professional athletes can see, Brown knew there was more to life than the glory and fan worship of football after his older brother, a soldier, died in Iraq after a mortar shell hit his battalion.

"I question how much attention is given to football," Brown said in ESPN writer Seth Wickersham's excellent 2011 profile. "But it's tough. It's a huge machine that I'm benefitting from."

Brown's release provided the lineman an opportunity to step back from that machine and start First Fruits Farm, where he can step away from the hero worship of the NFL and provide food for the hungry. So far this year, Brown has already given away 46,000 pounds of sweet potatoes and 10,000 pounds of cucumbers according the News & Observer. Check out CBS' interview with Brown below.