Triple Divide promises a thorough look based on "cold, hard facts" on how the Pennsylvania DEP is failing to protect the public water supply from the gas industry. Tonight at the Erie Art Museum at 7pm. 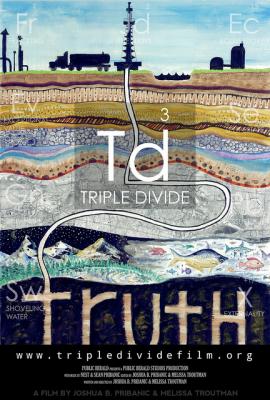 Poster for a previous showing of the film, Triple Divide

One of the most eye-opening experiences about slapping together that fracking cover story a few weeks ago was finding out how little good information about unconventional gas drilling exists, despite the exhaustive amount of articles and films and industry information out there.

Which is why I'm fired up to check out "Triple Divide" tonight at the Erie Art Museum. It's a documentary on the negative environmental impacts of gas drilling in Pennsylvania and the state's Department of Environmental Protection's (DEP), er, inadequate response – and it's best feature, perhaps, is that it's factual, evidence-based.

"This is investigative journalism," said Melissa Troutman, the film's co-creator in a telephone interview. "It gives cold, hard facts about what's going on."

The film's other co-creator, Josh Pribanic, also emphasized that they came into this story without preconceived ideas or biases against gas drilling. "People want the straight facts on fracking," said Pribanic, "this film tries to do that. That's what separates us from other films, it's strictly based on evidence."

Originally slated as a film about the social and cultural impacts of fracking on rural communities, Troutman and Pribanic changed the focus of the movie after realizing state regulators were letting the extraction industry drill without extra scrutiny in pristine watersheds – especially troubling, given what the pair found out about the DEP's habit of continually finding ways to allow gas companies to avoid fines or punishment for violations of Pennsylvania's water quality regulations.

The most serious case of the DEP overlooking the gas industry's violations revolves around "predrill" water tests. The predrill tests are independent analyses of the composition and quality of local water before gas drilling begins; they serve as a kind of baseline of the water quality to measure against any potential impacts to the water drilling may have. In a sense, they're the landowners best – and sometimes only – insurance against water contamination from local unconventional well drilling.

"The DEP often comes in when the well is contaminated," said Pribanic, "and says the predrill tests were invalid." The DEP regularly sides with the gas industry on its claims about the validity of these predrill tests, often dismissing them, and negating any ability for landowners to ensure that drillers restore their wells' water quality.

The worst part about this practice is that, in essence, the new water tests, done after contamination, become the new baseline for water quality, not just for the landowner directly affected by drilling, but often for the landowners in the surrounding area.

"They're facilitating one of the worst tragedies of the commons in human history," said Pribanic, "both culturally and environmentally."

Triple Divide is showing at the Erie Art Museum tonight at 7pm. Tickets are $5. Troutman and Pribanic will be attending.