Fassbender, who sports a plastic head for all but a few minutes, is revelatory as Frank, immersing us in the title character's complexity and enigma. 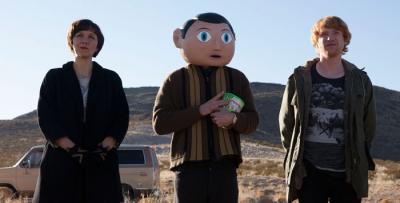 The line between psychosis and genius is a fine one, and it is also a devastating one. In Frank, this sad truth comes in the form of Michael Fassbender, clad in an enormous plastic head, free of all comparison to any of his previous work in Shame, 12 Years a Slave, X Men: First Class, or any of the like. As the title character, Fassbender is a brilliant, bruising force.

Confused? Rightly so, but Frank, the newest in the catalogue of Irish director Lenny Abramson is loosely based on the work of late British comic Chris Sievey, whose character of "Frank Sidebottom," would become iconic in a similar papier-mache head. Tearing apart preconceptions about malaise and art, it also feels like a sort of allegory for artists like Daniel Johnston and Kurt Cobain, whose demons would ultimately cripple their artistic and personal lives.

We arrive at this point first by way of Jon Burroughs (Domhnall Gleeson), an aspiring musician and songwriter who lucks out by scoring a gig with with the mysterious band Soronprfbs, whose music resembles some sort of oddly confounding mash-up of industrial, pop, acapella, and noise infused with stadium sensibilities.

When Jon runs across the band's keyboardist in a suicide attempt, he's recruited to fill in at the night's show.

The gig goes horribly, ending in a fallout between Soronprfbs members Clara and Don, with Jon uneasily playing along with the band's incalculable eccentricities.

In the wake of disaster, Frank, the band's troubled, enigmatic leader, invites Jon to the recording of their upcoming album, and the band embarks to a remote cabin that they've rented indefinitely for the length of their recording.

The sheltered, privileged Jon develops a morbid interest in the group's troubled past and mental illness, especially that of Don and Frank, who met in a psychiatric ward to later found their band. Jon, in witnessing Frank's brilliantly unorthodox methods and artistic processes, is drawn further to a romanticized ideal of what it means to be brilliant -- and insane.

Gleeson, in a quietly remarkable display of naivety, gets to the heart of Jon's embarrassingly warped preconceptions as he searches for his own miserable childhood and even his own "Bluff, Kansas," which we learn is Frank's hometown -- the place where Jon assumes all of the psychological trouble started.

Gleeson, in conjunction with Abramson's witty, gutsy sense of purpose, puts a human face on the stupid cliche that mental illness is something to be celebrated. It's a sad wonder to see Jon's twisted schema crumble around him in what Gleeson and Abramson turn into a slow burning, sympathetic statement about the way we romanticize and idealize psychological malaise. No excuses are offered for Jon's ignorance, but he's given mercy enough to live and learn, even in the film's final moments.

After more than a year of isolated recording, the band decides to abandon the album for a chance to perform at South by Southwest, a gig made possible by Jon's running blog chronicling the band's exploits, for which Soronprfbs, and especially, have gained a considerable cult following.

Despite protests from the other band members, namely Clara, who refuses to acknowledge Jon for the majority of the movie, the band dives into the project that could put them on the map.

Fassbender, who sports a plastic head for all but a few minutes, is revelatory as Frank, immersing us in the title character's complexity and enigma. Fassbender creates a unique visual language from Frank's eccentric captivatingly strange presence as a musician and artist, adding dimensions to Soronprfbs's transcendently weird musical endeavors. It's in these moments that we see Frank most clearly -- out of a smoky haze of neurosis and bristling artistic energy, Frank's masculinity, genius and enigma react to give us something impossible to forget. It can't be talked about enough.

Abramson and fellow writer Peter Straughan draw the line from genius to insanity without any of the expected textbook condescension or frustrating assumption that accompanies the sad reality at hand. With unshakeable honesty, quirk, and humor, they give us a portrait of the tortured artist and the artist's tortured life.

It's Fassbender, in moments like that of Frank's harrowing, inspiring rendition of "I Love You All" and the image of Frank spreading the ashes of a dear friend, that sticks with us.

Frank, above all, is a refreshingly original and human look at an all too tragic and true phenomenon, but it's also an unlikely psychotic masterpiece.