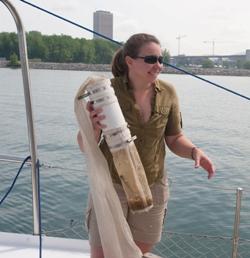 Like many who make the Erie region their home, Dr. Sherri Mason figures to spend her share of time on the lake this summer.

But Mason, a chemistry professor at the State University of New York at Fredonia, won't be out on a pleasure cruise. She'll be continuing her research into plastic pollution on the Great Lakes, and specifically Lake Erie.

Mason will be one of several researchers on the U.S. Environmental Protection Agency's ship, the Lake Guardian, which will be sailing Lake Erie from July 7-13. Mason and the other researchers will be working with 15 K-12 science teachers, essentially teaching the teachers how to take their research and turn it into usable classroom assignments and discussions.

Mason will be treading familiar water, but it wasn't until just three years ago that she dove into her Great Lakes-related research, despite living near Lake Erie since 2001.

"I never went out in the lake nor had a particular affinity for the lake until I went out in 2011," she said. "That changed my life in multiple ways."

That summer, Mason took part in an environmental science cruise on the U.S. Brig Niagara, and while on the water, she began wondering if plastic pollution was a problem on the Great Lakes as it was in the world's oceans.

The following summer, she and other scientists sailed Lake Superior, Lake Huron and Lake Erie, collecting plastic samples. Mason said she expected to net large items, like bottles or flip flops, but 70 percent of the plastic  samples were tiny – one-third of a millimeter to one millimeter in size.

The researchers ultimately determined that many of the samples were microbeads – tiny spherical plastic balls used as an abrasive agent or exfoliate in many personal care products. Now, Mason has taken that initial research and spun off into several related studies, including one that is looking to see if the microbeads are impacting the food chain in Lake Erie and the other Great Lakes.

During the winter, researchers analyzed the stomachs of Lake Erie perch and found on the average of nine pieces of plastic in each perch. The plastic itself, while a concern, isn't the most serious issue. Rather, Mason and others fear that the plastics may first absorb toxic chemicals before they are eaten by the fish, and those toxic chemicals could make their way up the food chain – all the way to the top.

Mason said researchers aren't looking to point blame at wastewater treatment operators. They're more concerned with the design of the product – the microbead. Essentially, Mason said, wastewater treatment plants were designed to remove human waste – and they generally do a good job at that. But the microbeads are somehow making their way through the treatment process and being discharged into local waterways – and ultimately, in our case, into Lake Erie.

While Mason and her cohorts continue to look at various aspects of the microbead issue, environmentalists have called for legislators to take up the cause and also asked manufacturers of personal care products to eliminate microbeads from those products.

Illinois already has passed a law that will make manufacturers remove the beads from their products by the end of 2018 while New York, California and Ohio are looking at similar legislation, Mason said.

Unilever claims it will phase out what it refers to as "plastic scrub beads" from personal care products by Jan. 1, 2015, while Johnson & Johnson notes on its website that it expects to "reformulate" about half of its products sold that contain microbeads by the end of 2015. "The timeline for the remaining products will be determined once our informed substitution assessments are complete," the website reads.

By the end of 2015, Mason hopes to have made substantial progress on her own research, to which she has a deepening connection. She said she was struck by the beauty of the Great Lakes on her very first voyage "and since then, I've sailed in all five, swam in all five – and if I get talking about them too much, I'll start crying.

"They're amazing. They're the largest freshwater resource in the world and they're in our backyard."