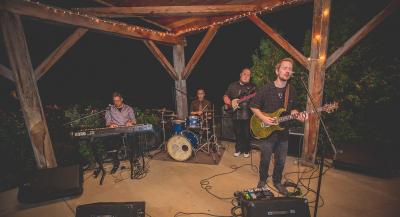 This weekend, Lakeview Wine Cellars will host the first of a seasonal series consisting of several summer favorites, including food, live music, and of course, wine. Running every Saturday through June, Lakewood Wine Cellars' Sunset and Jazz concerts will invite local favorites to lay down a soundtrack for the sunset, kicking things off with Eric Brewer and Friends on May 26th. The jazz-rock fusion band released their debut album Seeing Sideways in 2013, while Brewer was most recently spotted playing with Charles Brown at the artist's album release show at Kings Rook Club. Ron Yarosz and The Vehicle are slated to bring their unique brand of funk and blues to the series' second week, and the pair will trade off weekends for the rest of the month.

While these featured artists perform original music, patrons are encouraged to bring chairs, blankets, and picnic baskets in preparation to watch the sun set over the vineyard. No outside alcohol is permitted, but food, wine and Pennsylvania-produced beers will be available, alongside kid-friendly slushies, making this a must-attend event for the whole family. — Aaron Mook