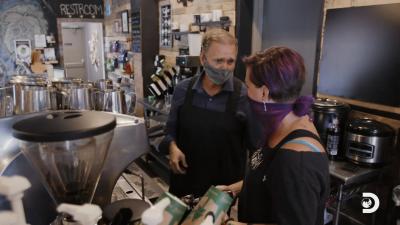 Stearns, of course, was the titular "undercover billionaire" of the original series' debut season (a second season is airing now). He abandoned his identity and all his resources and connections to come to Erie under the guise of "Glenn Bryant," tasked with building a million-dollar business in 90 days — with a measly $100 in his pocket. The result was the West Lake Road restaurant Underdog BBQ (valued at $750,000) and a name and reputation in the Gem City that now precedes him.

Discovery slyly used that brand recognition to drive the casting call for Comeback City, which itself was cloaked as a "business mentorship program." Many businesses applied, six were chosen based on human interest and the unique challenge of their situations. They include the Tipsy Bean (Gisele Littrell), Michael Making Lives Better (Michael Hooks), Dominick's Diner (Tina and Tony Ferraro), TKO Erie (Brian Arrington), Lake Erie Rubber (Jon Meighan), and Stearns' very own Underdog BBQ.

None of the owners are totally surprised to meet Stearns or see cameras — although Littrell says she "screamed like a little girl" when he first approached her cafe in mid-June. What they did not initially know, however, is that they would each be the dedicated subject of a 45-minute episode of a brand new series. "I didn't even know what they were going to do [with the footage] mid-August."

This time around, Stearns fully leverages his name and contacts to help these businesses accomplish a formidable feat — go from barely surviving to thriving in just 27 days. That number reflects how many days worth of cash reserves the average small business has at its disposal, although the cushions these enterprising Erieites are working with here are often much smaller — sometimes less than two weeks.

The stuff of desperation has always been the stuff of reality TV, dating back to Survivor (fittingly) and beyond. Again, it's rich material here, even if you were to not even be aware of Erie's existence. As Stearns says in a discussion with the Film Grain podcast's Erika Berlin and John C. Lyons, "Really it's a roadmap for any business in the country. When you take a look at it, Erie is a microcosm of what's going on everywhere … I hope it gives everybody wide eyes so that they can go 'Man, maybe I should be doing things a little differently at my business.'"

At the start of each installment, Stearns plays the role of observer, taking the time to learn each owner's backstory and passion, get a feel for their thought processes, and see their current operations in real-time. Other than some instances of repeating a line or action for the camera, the owners say it all unfolded very organically and very quickly.

Littrell recalls: "Glenn kind of right off the bat said, 'Hey, I'm ready to just get to work. We're going to dive into this. We're not wasting any time.' He literally rolled up his sleeves and we went into the kitchen. He's like 'Show me what you do.'"

Between the time crunch and foreboding bottom-line numbers flashing across the screen, each episode should be ripe with drama. As a local viewer, there's a good chance you might recognize or even be personally acquainted with these business owners, which should theoretically intensify that feeling. However, because of Stearns' sway and the simple fact that everyone loves a happy ending, none of the comebacks were ever in doubt. Would an Erie institution like Dominick's really be allowed to meet a tragic end under the watchful eye of Glenn Stearns, the proverbial self-made man? Not a chance!

It's clear that the featured businesses will be rescued, but with the caveat that you're witnessing a guided rescue. As Stearns repeats throughout the series, "It's a hand-up, not a handout." He distinguishes Comeback City as "a teaching show." After gathering intel, Stearns sagely outlines a plan of attack and it's up to the business owners to cast aside egos and preconceived notions and get on board. Along the way, he recruits relevant industry experts from his vast Rolodex (who scout the business undercover) to ensure it comes to fruition.

"Overall, Glen is very experienced, very knowledgeable, and he's able to relate on anyone's level because he is self-made," says Littrell. Stearns, who grew up in a low-income apartment complex outside of Washington, D.C., failed fourth grade, and fathered his first child at age 14, founded Stearns Lending in 1989 at the age of 25. At its peak in 2013 (shortly after Stearns abdicated his role as CEO), Stearns Lending was the fifth-largest privately held mortgage lender in the United States. Over the years, Stearns has diversified his entrepreneurial dealings under the umbrella of Stearns Holdings, LLC.

All that adds up to a fairly unique perspective and down-to-earth persona that seems to resonate with everyone on this show, despite the wildly different personalities involved (compare the bubbly, exuberant demeanor of Littrell with the gruffness of Hooks or circumspection of Arrington). No matter who you are, the lessons are applicable: Be brutally honest with yourself (or find someone else who can be). Determine what's working and what isn't — double down on your money-makers and "kill your darlings." Be opportunistic and identify new markets (#socialmedia). Associate with the successful people. Delegate and get yourself out of the weeds so you can think bigger.

The main takeaway from Comeback City is that there may secretly be an "undercover billionaire" hiding within any small business owner and entrepreneur. The paths to success vary, but the mindset and practice is remarkably similar between successful people. Even though you know a positive outcome is guaranteed with each business (because TV), it's still incredibly gratifying to see the very authentic gratitude and emotion on these people's faces when their new valuation comes back, often much better than expected. Not to mention that summer looks great on Erie, with some of the aerial shots of downtown and the shoreline portraying Erie in a more flattering light than you may be used to in mainstream media.

The undercover softie in me may or may not have shed a happy tear or two on behalf of the hard-working, well-intentioned individuals living amongst us in our community. I have a sneaking suspicion — a clandestine hunch — that you may too.

Matt Swanseger (mswanseger@eriereader.com), a lifelong Cleveland Browns fan, is not accustomed to being on the right side of comebacks but remains simultaneously jaded and hopeful.