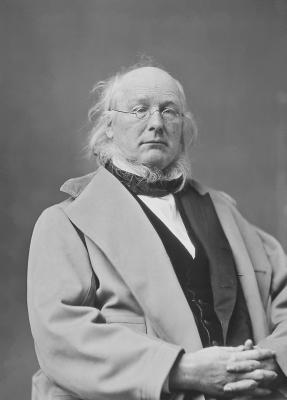 Public domain
Horace Greeley was a classic Erie hater. The newspaper man, who was famous for saying GO WEST, YOUNG MAN was also famous for saying some not so nice things about our city. We like to think we've proved him wrong.

For a short period of time, between 1830-1831, Horace Greeley, printer, editor, and founder of The New York Tribune lived in Erie in the building known as the Sterrett House (named for Joseph Sterrett, founder of The Erie Gazette) on the west side of State Street between Fourth and Fifth. Greeley was famously quoted as saying: "Erie is the shabbiest and most broken-down looking large town I, an individual not wholly untraveled, ever saw in a free state." Greely is certainly not the only one who has held this belief, as those in the comment sections can attest: the self-esteem problem in Erie shows up loud (and often in all caps).

Up until recently, the home in which Greeley resided during his short stint in our town actually was one of the shabbiest, most broken-down buildings on State Street. But that building (along with a shockingly large number of other historic buildings in the greater downtown area) has undergone a transformation. And as the oldest building on State Street, has been restored into something worth celebrating. How do you like us now, Greeley?

It is obvious to anyone spending time in Downtown Erie, that our city is in a period of major transition. This past year brought a ton of structural changes to our downtown landscape with some massive projects (restorations and new construction alike), new restaurants and businesses, and a bump in community activities to get us out and appreciating it all. When you live in the same town all your life, it's hard to imagine drastic changes, or really anything coming as a surprise. Which is why it's always exciting to learn something you've never known about a town when you thought you knew it all.

This "Year in Review" issue brought to light a few things this writer never knew existed in Erie before reading about them here. Surfing on Presque Isle. Who knew? There is a decent sized subculture of freshwater surfers who take to the waves of Lake Erie at a time when most people stay far, far away from the beach. There's a park on East 22nd Street featuring inspiring poetry emblazoned on metal sculptures. Who knew? And while there are some changes that are not positive (the attempted dismantling of Erie's Diversity, Equity, and Inclusion Commission, the continued closures or corporate takeovers of local newspapers, and the ever-increasing threat of fentanyl-related fatalities) there are always those people, local and beyond, fighting the good fight, and working to make the situation better.

And while Horace Greeley (that old grump) had some not-so-nice things to say about our city, we can keep on proving him wrong time and time again; whether that's by fixing up our old buildings, breathing new life and businesses into them, finding something new to love about our old town, or coming up with solutions to very complex problems, Erie is continually up to the task. Great year, Erie. Keep up the good work.