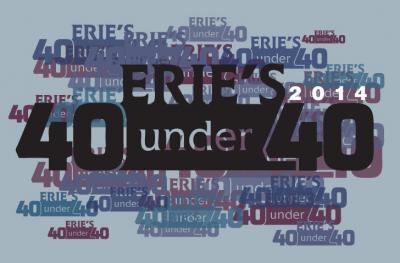 Last year, we at the Erie Reader catalogued forty young Gem City denizens to publish our first-ever Erie's "40 Under 40", a list of emerging leaders, innovators and entrepreneurs who were actively making Erie brighter, bolder, and better positioned to become the true gem we know it's capable of being.

Before that issue hit stands, we knew we wanted to make this a perennial subject to feature, a collection we would look forward to each year to serve both as a celebration of Erie's young talent as well as a reminder that emerging leaders, innovators and entrepreneurs are continually living and thriving in Erie, and in turn, they're leaving Erie better than they found it by cultivating its culture, developing its economy, and offering a vision for a bright future.

Judging by the response to the publication of our first "40 under 40" issue, Reader readers were both excited and proud to learn that Erie serves as home base for some truly incredible young people.

But then we wondered: What would it take to do this again? What would 2014's "40 Under 40" look like? Would there be repeats? Would we struggle to find a new crop of bright and bold young people making Erie a better city for us all? Would Brain Drain have defeated Erie in less than a year?

Not even close. As we started compiling the Class of 2014, we welcomed something new to the process. We asked you to submit nominations. And thanks to you, we received a flood of potential names for this year's list. Hundreds. Each and every one of those nominations held tremendous merit, and it was exceedingly difficult to decide on the final forty, but we did it.

Take heart, Erie, and know that there are dozens upon dozens of young people – not just the 40 you're about to meet in these pages – who are making a difference in Erie every day in different ways. Young doctors, lawyers, entrepreneurs, artists, and musicians are making this an exciting time to be here, so it is with fervent pride in Erie, its citizens, and its future that we introduce the 40 Under 40 Class of 2014, and again we say: In your face, Brain Drain!