From the Editors: Welcome to the Island of Misfit Toys 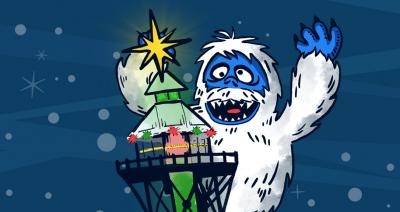 For years, the Montgomery Ward department store had been buying and distributing free coloring books for children during the holiday season. The Chicago-based retailer soon decided that they wanted to publish their own books instead as a cost-saving measure. But first, they needed a marketable story, and for that they enlisted May. Looking out from his office window, he saw a thick fog over Lake Michigan. Like a lighthouse guiding ships in the night, he pictured it: a bright red nose. He borrowed the meter from A Visit from St. Nicholas, and a star was born.

This children's story gained popularity year after year. A decade later, Johnny Marks — May's brother-in-law — wrote a song about it. The recording by Gene Autry sold 1.75 million copies in its first year. Over its history, it has sold over 10 million additional copies, and is the second-best-selling holiday song behind Bing Crosby's "White Christmas."

Rudolph's popularity began to snowball. The song gave way to a comic book, then another children's book, and in 1964, Rankin/Bass Productions released the stop-motion TV special Rudolph the Red-Nosed Reindeer.

That special would become ingrained in American pop culture for decades to come. It introduced audiences to Hermey (an elf and aspiring dentist), Yukon Cornelius (a prospector mining for precious metals), and the Bumble (a misnomered "abominable" yeti, who graces this issue's cover).

The characters find their way to the Island of Misfit Toys. There, toys labeled as "defective" have built a community together. Rudolph, with his nose so bright, found his tribe. He had a physical anomaly that at first brought him and his family shame, and as Sam the Snowman recalls, "The Donners did a pretty fair job of hiding Rudolph's, uh, nonconformity" (his father insisted he cover his nose to blend in with all of the other reindeer).

As everyone knows — he is, of course, the "most famous reindeer of all" — Rudolph's nose was the only thing that could help Santa guide his sleigh that foggy Christmas Eve.

It's a simple metaphor, but surprisingly moving.

We all have things about us that make us feel different. Sometimes we try to hide these things, but they can end up defining us. They're part of our identity. We all feel like misfit toys sometimes. Maybe we've started a business that's being marginalized (like Liz Allen's spotlight on a trio of sisters and their Airbnb). Maybe it's morphing a mom-and-pop grocery store into Erie's most beloved bakery (Matt Swanseger serves up a slice of Art's). Maybe it's doing comedy that breaks most of the rules (catch Ryan Smith's conversation with Tom Segura). Maybe it's surviving cancer and creating some of Erie's best music (Chloe Forbes looks at songwriter Teddy Rankin). Maybe you're a punk rocker who has found their voice (Nick Warren talks to Chris Barker of Anti-Flag). Maybe you're someone fighting for your right to vote (Bryan Toy reviews the Erie Historical Society's Women's Suffrage exhibit). Maybe you're someone who was willing to die for what they believed in (Jonathan Burdick examines the last days of abolitionist John Brown).

Whoever you are, that is who you are. You're important. What you might see as flaws don't need to hold you back — they can lift you up. You're a misfit, and so are we.

Happy holidays from our own welcoming island — there's a lot of things to do here.