From the Editors: A rebuilding year: brick by brick

Dumpster fires, retrospectives, and lists to ring in the New Year 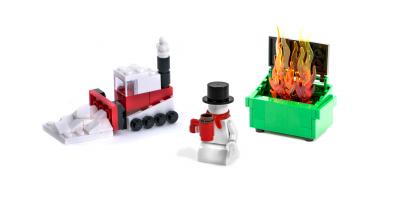 Over the past few we've felt some negativity as the Year in Review issue approached. That burning desire to finally say to the year that was and start again. Looking back on our covers you'll find the looming specter of death putting an end to 2014, a garbage dump in 2015, and in 2016 we needed a martini just to process it all. Those years seem like child's play compared to 2018, however. You know what's happening in the world. Lots of things. There will be lots of things happening in 2019 too, and not all of them good. Why this dread and bitter nostalgia sweep over us every year when we need to have something to say about the past three hundred and sixty-some days? Well, for one, we're realists. We know what's happening in the world too, and it's rightfully upsetting.

And just like the past few years, we're ready to close the lid on this dumpster fire. It's a rebuilding year — just look at the LEGO work on the cover. Special thanks to Bruce Lowell (for the original dumpster design) and Bill Ward for his tongue-in-cheek adaptation of it. Brick artists know a thing or two about rebuilding. This city is learning a thing or two about it as well, for better or worse depending on who you ask. If you happen to ask Matt Swanseger, he has a thing or two to say about it too, with plenty of acerbic commentary on all the strange goings-on around our city, complete with and the good news and the bad.

So as old regrets should be forgotten and never brought to mind, so too is this a time to remember a few of our favorite things. By "our," we mean both the Reader and the Reader's readers, too. The votes have been tabulated for this year's Best of Erie Awards and we're proud to present the top three finalists for each category. This year saw the most votes cast ever. We want to extend a sincere thank you to every single person who voted, shared, and nominated anyone for this year's awards. Your voice is being heard, and we're inclined to agree.

Lists, lists, lists. That's what we're into during the final weeks of December. Our music writers, Aaron Mook Nick Warren teamed up to give you a top 10 list of the best albums of the year (with Warren throwing in another recurring feature, the top three local albums as well). Forest Taylor was happy to build a top five (or maybe six) list of his favorite films, and trust us, he's seen plenty. There are also a few favorites Warren selected for your perusal on the small screen, perhaps a cozy way to occupy your time during that strange stretch between Christmas and New Year's Eve. And speaking of New Year's Eve, Cara Suppa has a festive rundown citing some of the can't-miss events going on that day (and more so, that night).

It's time to raise a glass and toast to what's ahead, and maybe next year, we won't need to be quite as cynical.

From the Editors: Local Businesses Aim to Level Up

From the Editors: Divisibility and indivisibility

From the Editors: Signaling for help

by The Editors7/29/2020, 9:00 AM
Unfortunately, many pleas for help are neither seen nor heard, however visible or loud the distress signals

From the Editors: Pomp and Consequence