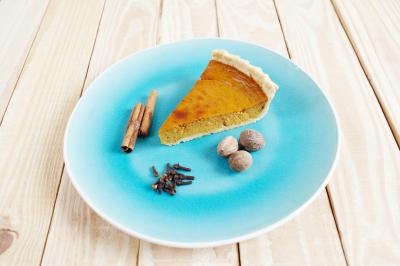 Set aside religion and politics for a moment — the real elephant in the room we ought to be discussing is the one that put the pumpkin pie on the Thanksgiving table.

That's right — Cucurbita, the genus of gourds that includes just about every squash and pumpkin we like to eat, was actually first spread across North America by prehistoric pachyderms such as the wooly mammoth and mastodon. The pilot versions of these fruits were smaller and significantly more bitter than their latter-day counterparts, which deterred rodents and other critters from gnawing into their seeds while still allowing those massive mammals (who were more apt to swallow them whole) to shovel them in by the trunkful. The intact seeds were left behind with a nice dollop of natural fertilizer and behold — Pumpkintown Pre-USA.

Early humans likely ate the primordial gourds as well, rinsing the toxic compounds away from the otherwise edible seeds while avoiding the tough, stringy flesh. Over time, however — especially after the mammoths went extinct — wild squashes gradually adapted to (and were domesticated to) become larger, sweeter, and generally more palatable for our kind. Thousands of years later, pumpkin pie is America's favorite Thanksgiving dessert — but only because we learned to work around the initial bitterness.

Few things are perfect from the outset. Through patience and diligence, we can cultivate a sweet outcome. Until then, we make do with what we have. Erie's most beloved small local businesses — places like Kraus Dept. Store, Books Galore, Larry's Central Market, and the dozens of others profiled throughout the Reader's publishing history — are like the warmly spiced holiday treats we keep coming back to, as addicting as anything you'd find on Arrakis.

But they are the exception. The bitter truth of the matter is that only about one-half of small businesses survive past their fifth year, and only about a third ever celebrate a decade. For most, a lean harvest is much more common than a bumper crop. Loyalty must be slowly nurtured — one sale, one smile, and one customer at a time until firsts become seconds, seconds become thirds, and lifetimes become generations. But they have to be given a chance first.

You don't know what you're missing until you get a taste of what's out there. That starts by shopping small this holiday season and beyond. Even if small businesses occupy a smaller slice of the GDP pie, homemade almost always tastes better than something out of a box