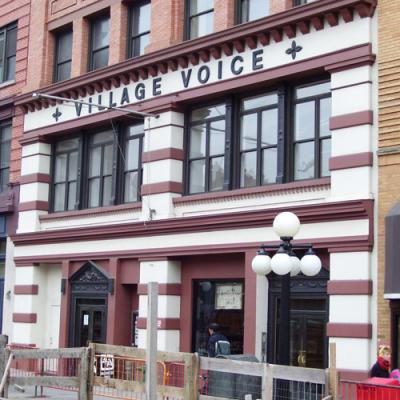 The print edition of the Village Voice – an independent alternative weekly publication that birthed the classification; a publication designed to give readers a source of news, arts, and culture; a place where counterculture could be celebrated; and a source of inspiration for many to read new authors, listen to new music, and explore new places – died Tuesday, Aug. 22, 2017, after a lifelong battle swimming against the mainstream. The proponent of punk rock, dive bars, off-Broadway theater, and political coverage not shy of opinion was 61.

The brainchild of Dan Wolf, Ed Fancher, and Norman Mailer, The Village Voice was born in New York City, New York October 26, 1955. The death of the print edition of The Village Voice came as a shock to some. Some weren't aware it was still alive. Others never knew it even existed.

Known for handling its muck with a rake, the print edition of The Village Voice enjoyed debating philosophy, introducing its readers to various recipes for guacamole (including most recently avocado toast), scorning gentrification, and teaching urban dwellers how to be urban dwellers. Other pastimes including helping friends sell IKEA futons to other friends looking to buy IKEA futons while making or breaking the careers of many ambitious writers who felt their voices weren't fit for conventional media.

Gone are pages filled with stories of local interest. Pieces similar to Jim Wertz' critique of the Erie City Code Enforcement policies, holding a magnifying glass to the problems voiced by local homeowners. Gone are observations like Ben Speggen's as he questions why a crucial  mayoral race has cooled down so significantly. Gone are expert bits of advice on how to handle the stresses of going back to school. Gone are the first person accounts like Mary Birdsong's, championing an environmental victory taking place at a popular state park.

Media analysts and professors are continuing to determine the exact cause of death. Early speculations include homicide by Craigslist, a failure to adapt to changing markets, a general loss of edginess and relevancy, and the birth of the Internet.

Left to mourn are guerrilla journalists and truth seekers, many of whom now wonder the fate of gritty writing rooted in a desire to make a community more aware of itself. They remain skeptical that digital media can and will be capable of producing what the printed word has done since the early 1440s.

The print edition of The Village Voice, which saw a bevy of caretakers of various caretaking ability throughout its six decades, was preceded in death by several of its well-known and once widely respected offspring, including the Boston Phoenix and the Philadelphia City Paper, as well as many distant nieces and nephews. It is survived by The Seattle Stranger, the Chicago Reader, and many distant, smaller yet scrappy relatives such as the Erie Reader.