We must cultivate our garden. 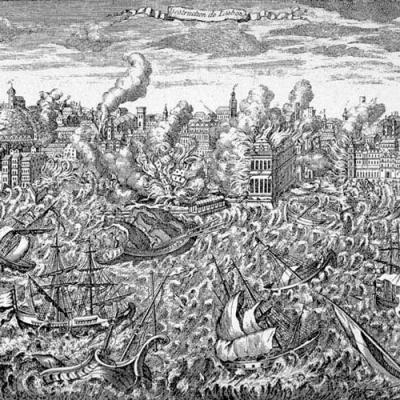 Voltaire's Candide is the story of a naive traveler trying to reconcile his tutor's philosophy that this is "the best of all possible worlds" with the litany of horrifying events and desperate characters he encounters during a long, outrageous journey. Thousands perish in the Lisbon earthquake. Women are raped and owned. Priests get away with decidedly non-Christian behavior. Soldiers are punished for inadequate barbarism. Wealthy countries plunder and enslave those less "developed."

Though Candide was first published in 1759, its satirical take on current events is painfully contemporary, given the onslaught of horrifying headlines we're bombarded with daily. Thus, Candide's sense of overwhelming helplessness and exhaustion feels utterly familiar.

His tutor attempts to justify even the worst of society's ills with "everything happens for a reason"-style dismissal. But Candide loses faith in this intellectualizing and explaining, which distance him from his own human empathy.

Toward the end of the story, he meets a contented Turk who doesn't overly concern himself with the trials of nearby Constantinople. "I presume in general that they who meddle with the administration of public affairs die sometimes miserably, and that they deserve it," he tells Candide. The Turk, instead, has turned his attention to his family's ability to grow sustaining food on their little plot of land.

"Our labour preserves us from three great evils — weariness, vice, and want," the Turk explains.

Martin, Candide's most Taoist traveling companion, agrees. "Let us work," [says] Martin, "without disputing; it is the only way to render life tolerable."

Though ignoring the world at large would be wholly irresponsible, Candide is a great reminder that choosing action gains us power over paralysis. And this issue once again features several examples of those spearheading right action locally.

In arguing that "Erie desperately needs a win, having long ago reached a point where financial woes became excuses for doing nothing," sociologist Josh Morgan states that "The McBride Viaduct is a platform for innovation waiting to be utilized." A group of local leaders invites supporters to convene at City Hall on Dec. 16, to convert advocacy into action.

In recommending a few great options for locally-produced gift ideas, Jim Wertz says that "The holidays give us an opportunity to support some pretty great local employers as well as a host of independently employed local people, many of whom give back to the region in ways both seen and unseen, celebrated and unmentioned."

And in explaining how Kraus Department Store has maintained a symbiotic relationship with its surrounding community for over 125 years, general manager Rory Nowosielski tells Matt Swanseger, "I care about Erie."

The last line in Voltaire's masterpiece is spoken by Candide, himself. Reflecting on all that he has witnessed, he determines the ideal way to make sense of the world: "Let us cultivate our garden."

Likewise, the best shot we have at bettering our community comes from our ability to remain locally active despite intensely distressing news. And as always, we need look no further than our fellow Erieites for inspiration.