In with a bang. 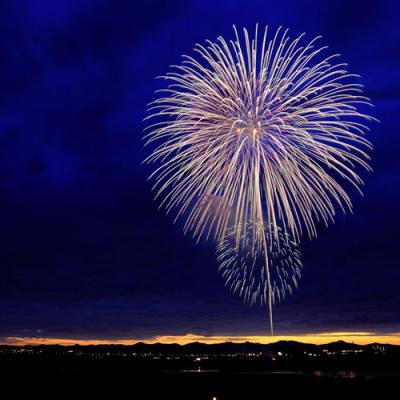 Like fireworks popping overhead, summer is coming in with a bang!

The smoke will eventually settle. The childlike wonderment might fade from your eyes a bit, but you still know that there's something special in the air. Summer is our time to get things done, and ideally, those things are pretty damn fun.

With 8 Great Tuesdays, the Sunset Music Series, Mid Day Art Breaks, and Block Parties underway, there are plenty of chances to hear some live music in the breezy open air. Whether you're settling down in your folding chair or dancing it up right by the band, it's easy to fill your schedule these days.

The Fourth of July's display of explosive bursts won't be the only time you hear noisy combustion this month. One of Erie's most polarizing events is revving its engine at our doors, as Roar on the Shore begins on July 12. The well-heralded motorcycle rally is now entering its 11th year. Some locals can't stand it. They consider it noise pollution (not to mention the more traditional air pollution) at best. Some regional riders see it differently, as a chance to show off their ride and join in on the party. Then still, there are the visitors, making their annual pilgrimage to the Gem City and loving every minute of it. No matter what your take is, it's pretty difficult to ignore when you're in downtown Erie.

Meanwhile, another event has sprung up as a direct reaction to Roar on the Shore. After last year's complaints that local food vendors were being shut out in favor of out-of-town suppliers, the West Erie Plaza started up Gears & Grub. Now in its second year, the weekend event is finding its footing, with a packed parking lot of local performers and food trucks alike.

More events are gaining traction as well. For the third year in a row, the King's Rook Club is hosting "Purple Jam," a unique event where some of our area's best musicians get thrown into the mix together and wind up playing a brand new set of original music. For fans of the harder stuff, the 814 Fest is celebrating its sixth year in action. Metal fans won't want to miss the weekend filled with 20 bands livening up the Wattsburg Erie County Fairgrounds.

Finally, it's also never too early to look ahead, as the Mercyhurst Institute for Arts & Culture (MIAC) just released the details of their impressive upcoming 2017-2018 season. We take a closer look at the lineup, which features a handful of well-known names along with some less familiar faces boasting incredible talents. As we've come to expect from MIAC, it's another world-class parade of the arts, all right here in our own backyard. So, as summer truly begins, rest easy knowing that there are plenty of good things in store.