Changes lurch ahead as eyes turn to Erie 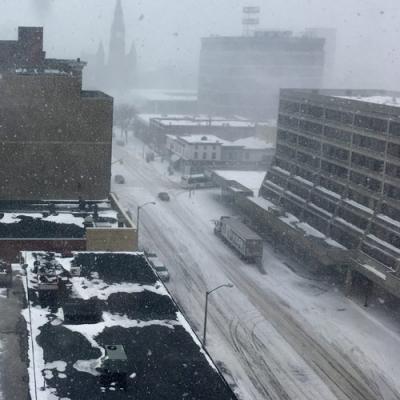 It's getting colder and harsher out there. Winter breezes burn our faces well into the month of March, while memories of another abnormally warm winter linger. Lake Erie spends more and more time unfrozen and the once ubiquitous snow mounds melt away in a few days. But of course, this kind of climate change in a few short years is nothing we need to worry about, is it?

Changes can come in increments large and small. These days, it seems like we're being bombarded with new developments on an hourly basis. There's a political climate change we're getting swept up in as well. The new baseline for normality is growing further out of reach. Did any of us imagine that we'd be here this time last year?

Eyes continue to turn to Erie. Our city has become the de facto stand-in for the Rust Belt as a whole, the spokesmodel for a new face of America.

With that shifting conversation, eyes continue to turn to Erie. Our city has become the de facto stand-in for the Rust Belt as a whole, the spokesmodel for a new, changing face of America. This brings attention both bitter and bold.

After a number of thoughtful, well-researched pieces in The Atlantic, the CBSNews.com feature on Erie painted a bleak portrait of our town. Focusing on a small handful of local Trump supporters, the takeaways were foreboding. Against melodramatic music, working-class laborers described Erie as a "sinking ship." One of the subjects interviewed, union president Scott Slawson, cleared the air recently in an interview with Kai Ryssdal for Marketplace.org. Slawson shared his strong apprehensions about the Trump administration, in one segment of their yearlong project centered on Erie titled "The Big Promise." A little more than a week prior, NPR's Frontline had stitched together a piece similar to CBS's, full of desolate visions of a city whose glory has long since faded.

Erie also got some unfortunate attention thanks to comments from absentee Congressman Mike Kelly. A video surfaced of the representative claiming that President Obama is staying in Washington, D.C. to run a "shadow government." That, paired with York, Pennsylvania State Senator Scott Wagner's recent remarks calling the Erie School District "disgusting," add to the list of embarrassing and tone-deaf comments from some of our elected officials.

Though these individuals often garner the biggest headlines, there's a large segment of our population that deserves our attention. Examining the growing issue of recidivism, Dan Schank takes a look at some of the key groups helping ex-convicts successfully re-enter society. It's a process that takes time, effort, and care.

In the next two weeks, we'll see St. Patrick's Day, the first day of spring, and the start of March Madness. A strange hat trick after the Ides of March that might help the month go out like the proverbial lamb as the weather gets more and more liveable.

Little by little, changes can be made for the better.