Different ways of being human 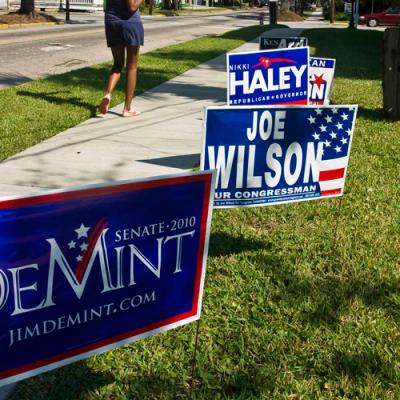 We have held the peculiar notion that a person or society that is a little different from us, whoever we are, is somehow strange or bizarre, to be distrusted or loathed. Think of the negative connotations of words like alien or outlandish. And yet the monuments and cultures of each of our civilizations merely represent different ways of being human. An extraterrestrial visitor, looking at the differences among human beings and their societies, would find those differences trivial compared to the similarities. – Carl Sagan, Cosmos

In a presidential election year, what separates us gets far more airtime than what connects us. The neighbors you chatted amicably with over the drone of lawnmowers put out a yard sign supporting the candidate you loathe, and suddenly they're the enemy. You're tempted to un-friend folks with opposing allegiances right and left on Facebook. You're inclined – perhaps just a tiny little bit – to rear-end the car in front of you festooned in the other party's snarky stickers.

Every four years, we redraw these familiar dividing lines. And begin to harbor the belief that we are right and they are wrong and how could they be so stupid?

And things have been getting worse.

A 2014 Pew Research Center report titled "Political Polarization in the American Public: How Increasing Ideological Uniformity and Partisan Antipathy Affect Politics, Compromise, and Everyday Life," explored how "Partisan animosity has increased substantially over the [last two decades]. In each party, the share with a highly negative view of the opposing party has more than doubled since 1994. Most of these intense partisans believe the opposing party's policies 'are so misguided that they threaten the nation's well-being.'"

The report also suggested that "there is a tendency on the left and the right to associate primarily with like-minded people, to the point of actively avoiding those who disagree. Not surprisingly, this tendency is also tightly entwined with the growing level of partisan antipathy. In both political parties, those with strongly negative views of the other side are more likely to be those who seek out compatible viewpoints."

Locally, from arguments about the EMTA to UnifiedErie to how to solve Pennsylvania's enduring budget crisis, divides deepen as sides clamber to carve out their own identifying beliefs in opposition to the other's.

Ultimately, we all have only so much energy and attention to spend in this fleeting life. And if we're spending all on how we differ, we'll have nothing left to spend on the awareness of our myriad similarities.

Nevertheless, Sagan's cosmic perspective is our road back to richness. "Every one of us is, in the cosmic perspective, precious," he writes. "If a human disagrees with you, let him live. In a hundred billion galaxies, you will not find another."