Five years of highlighting the best of Erie ... and we're just getting started. 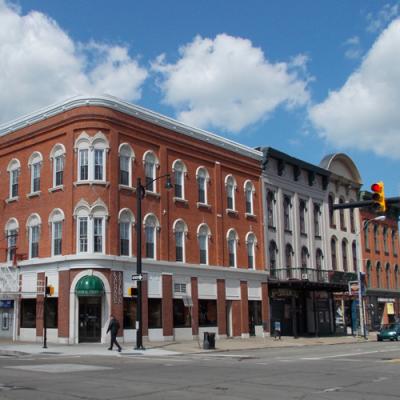 Some towns seem to have it all figured out. All of the accouterments of progress and hipness are evident, centralized, and easy to access.

You have to be a little more resourceful to discover the great things happening in Erie. Though an impressive number of individuals and organizations work tirelessly to improve daily life around here – and though many local entities offer the same level of rich cultural offerings you'd expect in larger cities – there's no single area with a blazing sign announcing: "Here's where interesting people go to do cool stuff."

Of course, that's where the Reader comes in. In fact, this issue marks five years of serving a similar purpose as that imaginary blazing sign.

And Erieites are nothing if not resourceful, as several featured in this issue once again exemplify.

Despite our inevitable limitations, Erie often feels like a place where fewer boundaries exist between having an idea and executing it. You don't have to be an expert with an alphabet of credentials behind your name. You needn't do something outrageous to set yourself apart from a sea of others trying to accomplish the same goals.

Despite our inevitable limitations, Erie often feels like a place where fewer boundaries exist between having an idea and executing it. You don't have to be an expert with an alphabet of credentials behind your name. You needn't do something outrageous to set yourself apart from a sea of others trying to accomplish the same goals. Though challenges abound (as with anywhere), the bottom line seems to be that if you want something to exist here, you might as well go ahead and create it.

Inspired beginnings like the one depicted in Ti Sumner's feature about the Therapeutic Riding Equestrian Center (TREC) exemplify this. TREC, which began when one of its founders came across an article about therapeutic horseback riding in Parade magazine, started from the sort of "we should do that here" mindset that has initiated so many great offerings in our area. Today, TREC has helped hundreds of local riders to cope with various disabilities and disorders through the bond between human and horse.

A similar spirit brought Chicory Hill Herbs into being almost 20 years ago. As Ryan Smith explains in his profile of this Peach Street establishment, the rest of the community – and much of the country – is catching up with Chicory Hill's forward-thinking approach to health and well-being which, in many ways, is actually a return to the pharmaceutical-free roots of wellness. The business provides a nexus for holistic perspectives, where those hoping to connect with a like-minded locals gravitate.

Musician Zack Orr, featured on this issue's cover, has demonstrated how the boundaries of a like-minded, appreciative community need not end at the city's borders. Orr's 365 Days of Song project, which enabled him to stream videos globally, will soon culminate in a celebration at Basement Transmissions.

And this spirit likewise had plenty to do with Elvage Murphy's launching of Shoot Above Par in 2010. As Jim Wertz explains in his column, "Murphy, himself an avid golfer, believes that golf helps kids learn to manage stress and anxiety, develop attention to detail, and foster relationships through casual, professional, and competitive interactions."

Murphy told Wertz, "For us it's about measuring ourselves against the values that we're talking about – honesty, integrity, and sportsmanship – and it's about exemplifying those values in a way that they see and experience."

So many locals make Erie better by exemplifying the values of a strong community. What we lack in local financial resources, we more than make up for in individual creativity and resourcefulness.