That could never happen here. Right? 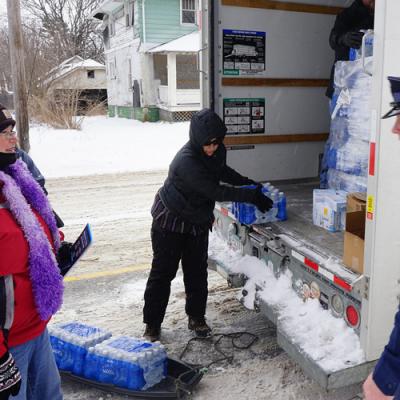 When news of the Flint, Michigan water crisis hit nationally, you could almost hear a collective gasp. Coast to coast and at every level, politicians to celebrities to everyday citizens reacted incredulously to the news that a city – an American city – could fail to provide clean water to its citizens. Knowingly.

But not everyone was shocked. Just ask the thousands of Flint residents who'd been enduring declining health, or the parents-turned-activists who'd been speaking out since they first detected something was horribly wrong.

Can the recent announcement from Erie School District Superintendent Jay Badams that Erie must consider closing all four high schools be justifiably compared to the Flint water crisis? Not exactly. But there are parallels.

For example, long-term academic potential is threatened in Flint and Erie. And unless big changes are made, both communities' shrinking tax bases are likely to perpetuate current conditions. Who wants to live in a community that can't – or won't – provide clean drinking water or quality education to its residents?

There are more, certainly. But the most striking parallel is the one that reveals a deep-seated human tendency to ignore the warning signs of collapse.

To cope with our hyper-histrionic news landscape, we've become too quick to embrace dismissiveness. So much bad news, all the time – and yet, we imagine it at a distance.

To cope with our hyper-histrionic news landscape, we've become too quick to embrace dismissiveness. So much bad news, all the time – and yet, we imagine it at a distance.

So somebody tells us that our school district is in imminent danger of imploding – or that fracking (also addressed in this issue) is polluting drinking water, destroying arable land, and creating earthquakes – and we call them Chicken Little.

Buddhist teacher Pema Chödrön describes this very human tendency to not be able to grasp the enormity of what's right in front of us, even when it's grand: "It's as if you were in a spaceship going to the moon, and you looked back at this tiny planet Earth and realized that things were vaster than any mind could conceive and you just couldn't handle it, so you started worrying about what you were going to have for lunch. There you are in outer space with this sense of the world being so vast, and then you bring it all down into this very tiny world of worrying about what's for lunch."

But as we face today's warnings collectively, we ought to at least give Chicken Little a chance to speak, before making him into our lunch. As a community, our ability to comprehend these possibilities is stronger and more resilient, and comes with an intelligent power to effect change we cannot summon alone.