Ever wonder where the whole "Keep ____ Weird" phenomenon began? 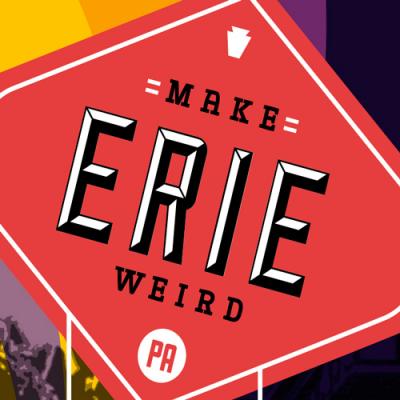 Ever wonder where the whole "Keep ____ Weird" phenomenon began? Many attribute its genesis to Austin. But back in 1982, writer Richard Boler published a satirical piece in Showcase that encouraged readers to get up-in-arms about the city's greatest crisis: its rising draft beer prices. He called on his fellow citizens to join CHUG: the Committee to Harangue Unscrupulous Greedmongers, and promised those who wrote to the paper a "Let's Keep Erie Weird" button to wear as a symbol of their solidarity.

To Boler's (and Showcase's) surprise, a handful of readers sent in their $1.25, and the buttons then had to be printed. "Let's" didn't quite fit, so "Keep Erie Weird" was born.

Several years later, "Keep Austin Weird" took off, as Scott McGrath elucidates in this issue. And in the early 2000s, the Erie Times-News printed new "Keep Erie Weird" buttons, spreading the word out about rockerie.com.

Regardless of whether Erie or Austin can claim the original campaign for weirdness, the common theme echoes one we explore repeatedly in the Reader: Who are we? What is Erie's distinguishing character? And how can we best celebrate and promote it to help our city thrive?

"Keep Austin Weird" began in an effort to promote small businesses and avoid the generic-ification inevitable when big box stores move in.

Small businesses, it was understood, are at the heart of a city's identity.

One perfect example of this is AcousticSheep, the Erie-based company that produces SleepPhones and RunPhones. Their mission, to "use local resources, leverage technology, and be socially and environmentally responsible," has extensive potential to boost Erie's creativity – and confidence – in the realm of practical, ingenious innovation.

AcousticSheep, meanwhile, is no stranger to recognition. But this has been one banner month. On Saturday, Nov. 7, they were featured on CBS' The Henry Ford's Innovation Nation, hosted by Mo Rocca. And Nov. 10 brought the announcement that AcousticSheep has won Consumer Electronics Association's Innovation Entrepreneur Award, 2015 Small Business of the Year.

What a wonderful counter to the recent devastating news that GE will lay off 1,500 Erie workers. AcousticSheep's "flock" is nowhere near GE's size. But they're a refreshingly encouraging example of the way innovative businesses can thrive in Erie.

It's certainly no easier to start a small business here. But that hasn't stopped numerous Erieites from finding a need, creating the means to fill it, and keeping this community's wellbeing in their sights.

In an interview last February in the Reader, AcousticSheep CEO Dr. Wei-Shin Lai told Jim Wertz, "unethical businesses can't survive. It's only the ones that give something of value to the world that are going to make it."