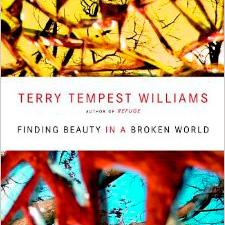 Though divisiveness is the order of the day, at least according to most news outlets, surely we can all agree that we're living in a broken world. Each cycle of layoffs, each report of violence, and each horrifying climate change projection fractures our hearts and splinters our humanity.

In her book Finding Beauty in a Broken World, Terry Tempest Williams writes, "There are long skeins of time when I feel so confused and lost in this broken world of our own making. I don't know who we have become or what to believe or whom to trust."

A common theme has arisen in this issue.

In exploring how theater might be used to curb violence, David Szymanowski writes, "conflict can be transformed into an opportunity for compassion through interaction instead of reaction. Through slow thinking instead of fast thought. By viewing commonalities instead of contrasting differences."

In describing recent symbols of solidarity in social media, John Lindvay writes, "Finding a way to show your support is an attempt at creating a human connection in the world. That's where the real power is, and what fear and terror are ultimately trying to destroy."

In addressing rampant misperceptions about Islam, Ajla Glavasevic writes, "I pray that we heal. I pray that we communicate and that we forgive so that we can finally start working toward a better future."

So long as dignity and equal rights are denied to any of us, they're impossible for all of us. So long as it's "they" and not "we," no peace can propagate. But hope is easy to find if we look around us. And so many Erieites are creating beauty in the world they've found.

In clarifying how climate change is a moral issue, Pat Lupo, OSB, writes, "The earth that we live on, our air, and water are sacred. We have a moral obligation to care for the planet – to act for the well being of all generations."

Williams cites the U.N. General Assembly's Universal Declaration of Human Rights, adopted on Dec. 10 of 1948, which states that "recognition of the inherent dignity and of the equal and inalienable rights of all members of the human family is the foundation of freedom, justice, and peace in the world."

Almost 70 years later, we're still stumbling over that "all members of the human family" part. So long as dignity and equal rights are denied to any of us, they're impossible for all of us. So long as it's "they" and not "we," no peace can propagate.

But hope is easy to find if we look around us. And so many Erieites are creating beauty in the world they've found.

"What is real to me is the power of our awareness when we are focused on something beyond ourselves," Williams continues. "Our ability to shift our perceptions and seek creative alternatives to the conundrums of modernity is in direct proportion to our empathy. Can we imagine, witness, and ultimately feel the suffering of another?"

Our community is filled with people proving that we can. And for that, we should all give thanks.