From the Editors: On Hard Copies and Softening Hard Landings

After a nearly two month hiatus, our printed issue returned on May 20 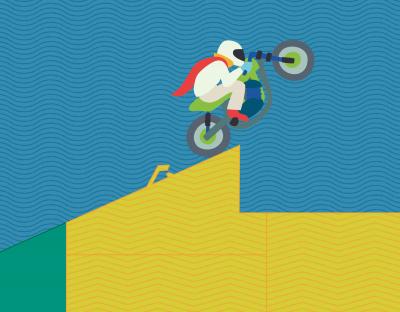 It was on Sept. 8, 1974 that daredevil Evel Knievel attempted his infamous Snake River Canyon Jump, an absolutely absurd leap across a mile-wide chasm on a rocket-powered motorcycle that would have ended in tragedy, if not for the serendipitous early deployment of the stuntman's escape chute.

In other words, he got lucky. Not all death-defying feats ultimately succeed in defying death — "Mad" Mike Hughes, Guinness World Record holder for longest jump in a stretch limousine (103 feet), perished in California this past winter when the landing parachute on his rocket detached too early. Although tightrope walker extraordinaire Nik Wallenda was successfully able to cross Niagara Falls in 2012 (and Nicaragua's Masaya Volcano this March), his great-grandfather Karl tumbled to his doom when a wind gust knocked him off balance during a 1978 highwire walk between two hotel towers in San Juan, Puerto Rico. In 1974, Frenchman Philippe Petit could be seen as a man on wire 110 stories above New York City, on a rope strung between the freshly constructed World Trade Towers. Similar stunts, vastly different results.

Now, in May 2020, the entire world finds itself suspended in mid-air, calculating a perilous landing. Despite what the conspiracy theorists would have you believe, the COVID-19 global pandemic is no publicity stunt. Nonetheless, it's sent us hurtling up a curve of disturbing numbers, involuntarily, into a terrifying unknown. Where do we come down, and when? How much of ourselves will remain intact, and how long it will it take to mend the bumps, breaks, and bruises?

Our economies, our livelihoods, our psyches are not likely to stick this landing — it's going to hurt. We've already seen the fractures and divides. If we are to survive at all, however, community will need to be our parachute, with well-intended, well-researched, and well-executed measures taken by our leadership to ensure it has what it needs to function properly. Electing any government official is a bit of a trust fall — electing one in 2020 even more so. In this issue, we interview a candidate who hopes to catch your vote in November in incumbent State Senator Dan Laughlin, and one that is helping brace us for change already in County Executive Kathy Dahlkemper.

By the way, we can't begin to express how happy we are to reprise the prepositional phrase "in the issue." After a run of 240 print editions released weekly or bi-weekly over a span of nine years, the Erie Reader was forced to temporarily suspend print operations with the governor's lockdown order in March. Like most businesses in our city and across the nation, we've been forced to improvise and adapt to survive, most notably leveraging and vastly expanding our online platform to line ourselves up for a cleaner landing (check-in here at eriereader.com daily, and sign up for the new weekly email newsletter).

Admittedly it's a little strange to exist as the local voice for news, arts, and culture without the wonderful events to physically observe the arts and culture in action. But the people behind everything that makes this city what it is are still here, still doing things worth spotlighting and celebrating. And as long as that's the case, the Erie Reader will continue to put itself behind them — you — our community.