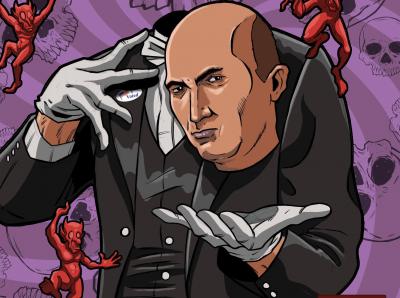 By most accounts, Erie-born magician Harry Kellar had an exceptionally good head on his shoulders. Throughout his standard-setting career, he demonstrated savvy, dignity, and class, while never forgetting where he came from. But despite his family-friendly reputation, he wasn't above a little shock value. For instance, detaching that distinguished dome of his in front of a paying crowd of men, women, and children of all ages.

The Self-Decapitation illusion was one of several jaw-droppers Kellar, now fondly remembered as "The Dean of American Magicians," pioneered in his time. Audience members watched — some aghast — as Kellar casually popped off his head and allowed it to float serenely into the darkness with a smile and a nod. It was a refreshingly macabre reminder to never underestimate the power of nonverbal communication.

Today, nearly a century after Kellar's death, it seems we are all losing our heads a little — and not always wearing our best faces while doing so. Who could blame us? As a nation, we are like a box sawed in half, legs churning to free themselves from past sins as arms wriggle frantically in a haze of uncertainty. We are a set of disparate metal rings that no sleight of hand can seem to link back together. We are divided over how to balance our health and our economy; how, who, and what to vote for; and whether or not we can even coexist.

A return to mutual respect and tolerance may be this country's greatest trick yet, a bona fide Houdini act (who considered Kellar a mentor and one of his dearest friends, by the way) considering the mire we're in now. But if history has taught us anything, it's that in times of turmoil, cooler heads prevail. It's about tuning out the noise and distractions and focusing on what really matters. It's not having the biggest yard sign or the loudest voice; it's the right to have that yard sign and have a voice — whether you're woman or man, black or white, gay or straight, Christian or Wiccan, or anything in between. It's most important that our democracy — and the opportunity to live your best life, whatever that may mean to you — doesn't disappear.

Kellar once said of his masterful misdirection abilities that "a brass band playing at full blast can march openly across the stage behind me, followed by a herd of elephants, yet no one will realize that they went by." There's a lot of commotion out there right now, a lot of noise. Be not seduced by spectacle; do not fall prey to politicians' patter. Instead, take a good hard look at the mechanics of our institutions and operations and ask yourself if they're working for you, your neighbors, your loved ones, your children.