A breakdown of everything you'd probably break down and eat regardless 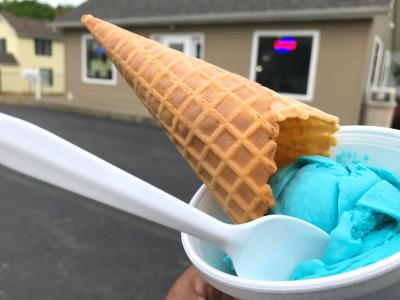 Nick Warren
Traditional meets experimental at The Freezerie on West Ridge Road. The waffle cone was introduced at the 1904 St. Louis Fair when ice cream vendors ran out of plates; this unmistakably blue sea salt ice cream has become one of The Freezerie's top-sellers since its debut.

There are several legitimate reasons one might scream. Traffic jams. In-laws. The sudden loss of a pet chinchilla. But there is one thing specifically that you scream, I scream, and we all scream for. And that thing, of course, is ice cream.

But perhaps that's oversimplifying it. Nowadays, one might get flustered over frozen custard. Or emotionally crescendo for gelato. Same difference? Au contraire — there are key distinctions to be made between our favorite frozen dairy fare. The chemistry and physics behind it can get pretty sophisticated — but don't worry; we won't turn this into a dessertation.

Milk, for all it's worth

To understand the composition of frozen dairy desserts, you must first understand the main components of milk: water, milk solids (the sugar lactose, minerals, and proteins), and milk fat (also referred to as butterfat). In milk's natural unpasteurized and un-homogenized state, the majority of the butterfat is concentrated in a layer of cream, which doesn't readily associate with the watery skim milk layer below (butterfat molecules are kind of elitist).

The vast majority of milk that is commercially sold undergoes homogenization, which busts the fat globules to bits under high pressure and redistributes them evenly throughout the liquid for a more universalized richness of flavor. Figuratively, it's socialism; chemically, it's called an emulsion (mingling two things that don't normally mingle).

Structurally, ice cream and its relatives require another element — air bubbles. However, homogenized milk is a pretty stable emulsion, meaning it doesn't separate easily. To derive ice cream and its relatives from homogenized milk, that emulsion must be destabilized only to undergo another emulsion (so the fat globules cling together again and to make room for the air bubbles). A spinning paddle called a dasher whips air bubbles into the ice cream mix (milk, cream, and sugar) as it is frozen, reshuffling the molecular bonds so that a "scaffolding" of sugars, ice crystals, and fats forms around them. Added ingredients called emulsifiers and stabilizers keep this delicate structure sound.

Much ado about fluffing

Is all this science melting your brain more rapidly than a hot fudge sundae? The (legal) definitions of frozen dairy desserts are really only based on two criteria: fattiness (butterfat content) and fluffiness (air content, or "overrun"). Products with more butterfat and less overrun will taste richer and have a denser texture, whereas those with less butterfat and more overrun will be lighter. According to the FDA, a product must contain no less than 10 percent butterfat, no more than 100 percent overrun (i.e. it cannot be fluffed to more than twice its original volume), and weigh no less than 4.5 pounds per gallon to considered ice cream; otherwise it falls under the catch-all category "frozen dairy dessert."

Gelato: An ice cream cousin perfected by the Italians; it is traditionally prepared with whole milk (3.5 percent butterfat) with no added cream and churned slowly to limit overrun.

Mellorine: Poser ice cream with vegetable oils standing in for most of, if not all of, the butterfat.

Sorbet: Contains no dairy whatsoever; also fruity. Super old school — legend has it that the Roman emperor Nero (37-68 C.E.) sent slaves into the mountains to fetch snow for him, which he then infused with fruit juices and honey. Today's sorbets are responsibly sourced, although you still might send your significant other to the grocery store "on an errand" to pay homage to the old ways.