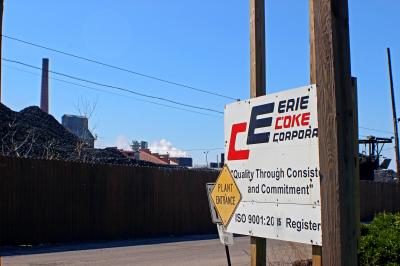 The Erie Coke Plant Community Impact Update on April 16 opened with a short video produced by MenajErie Studio. If you haven't seen it, take five minutes now. It's powerful.

I've watched the video several times, but I still get emotional. There's something uniquely moving about seeing images filmed near Erie Coke, realizing that our neighbors may be living in dangerous conditions — and feeling the full weight of what it implies about our city that we've allowed so many questions to go unanswered.

Those questions — and the lack of data regarding air, water, and soil pollution — were emphasized throughout the April 16 community event, hosted by Hold Erie Coke Accountable (HECA) in partnership with Group Against Smog and Pollution (GASP).

One way is by organizing a "bucket brigade" to gather soil samples, like the one that galvanized action against Tonawanda Coke Corp., Erie Coke's sister site, ordered shut by the New York Department of Environmental Conservation (NYDEC).

"[Soil] sampling is easy and cheap," explained Mike Campbell, a science and biology professor at Mercyhurst University who presented on April 16. "But we don't have the money to pay for the analysis."

It's hard to say how much it'll cost, considering the numerous contaminants involved. But "that's where the community can help," he suggested, "or we might find some benevolent local donors who would be willing to pay for the actual analysis." (Contact HECA directly if that's you.)

Campbell also noted that no groundwater testing has ever been conducted at Erie Coke, according to DEP. 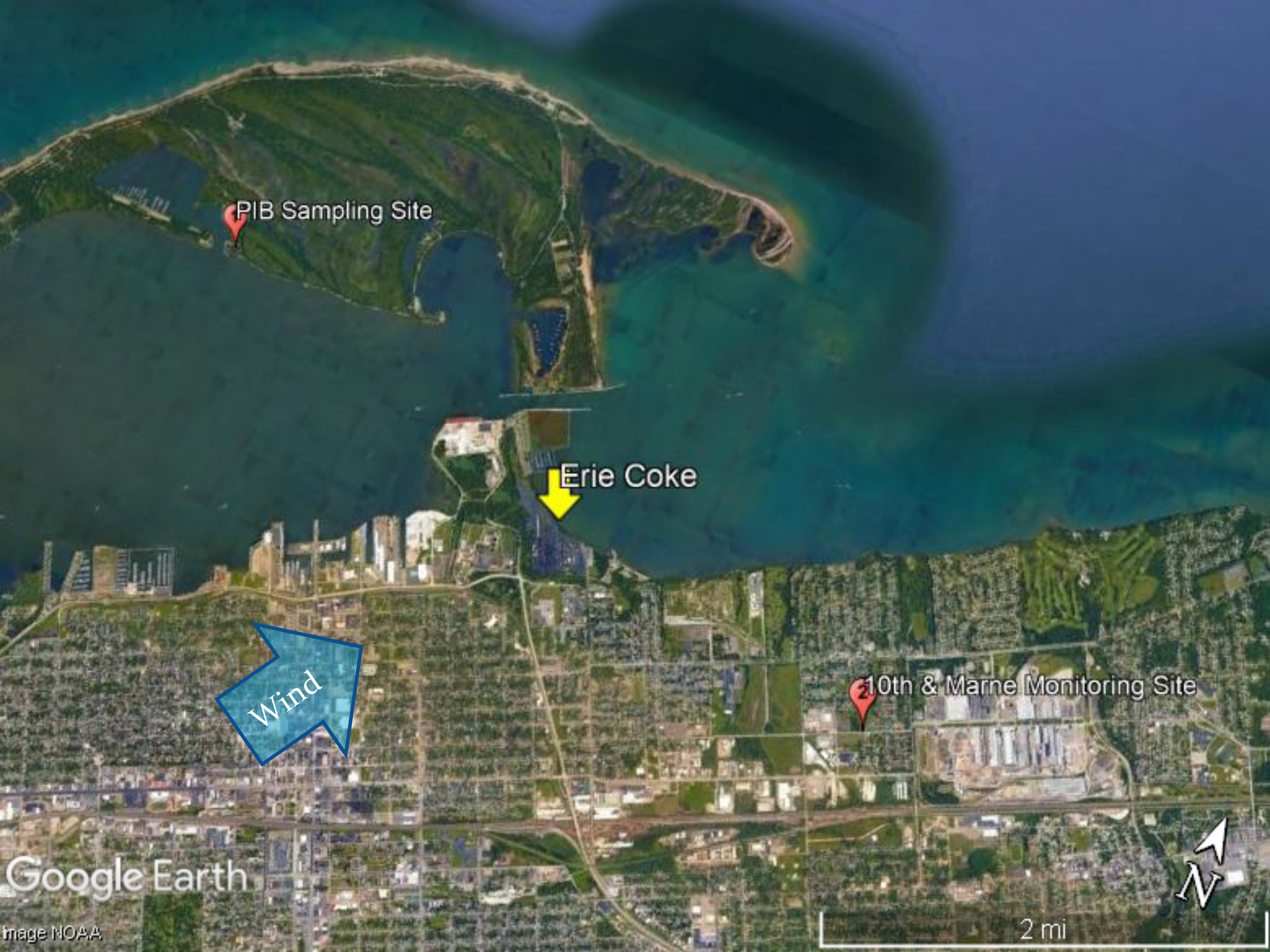 Neither of the two existing monitors — one on Presque Isle and one at 10th and Marne — is downwind from Erie Coke, and neither measures most of the pollutants that the plant emits. Additionally, the closest monitor is 1.6 miles away and 75 feet uphill.

"Some fenceline monitoring was done about eight or nine years ago, but very limited," explained Homan. "Nothing has been set up [continuously] for six months or a year, and that's what I would propose. Why hasn't that happened? I'm not sure, to be honest. I've let DEP know that we're very interested in having this monitoring done."

"Monitoring is expensive," reasoned Campbell. "But what happened to those millions of dollars collected in fines [levied on Erie Coke]? Why couldn't fine money be used to provide better monitoring?"

Campbell later explained that fine money goes into a DEP general fund. "It's a longstanding policy, but it still isn't right," he said. "Fines are paying for some other community's environmental enforcement, while we're without anybody in Erie to watch [Erie Coke]. Why can't that money go right back into our community?"

It's a worthwhile question, especially since public health issues related to pollution have a long history of costing communities dearly, and disproportionately affecting minority and poorer communities, according to multiple studies.

"My main interest in this permitting process," Campbell added, "is [ensuring] that the permits are not issued until we get answers to our questions about these health concerns. If [DEP] renews Erie Coke's operating permits without better air quality monitoring, and without answering questions about the groundwater and contamination of Lake Erie, it's going to be a crime."

"We need people to continue to report incidences and health concerns to the DEP," added Benedictine Sister Pat Lupo, part of HECA's leadership. She stressed that officials from DEP and EPA are watching this story, and the more reports they see, the better their case will be to demand compliance. (Contact DEP's Kim Yeakle: (814) 332-6839 or kyeakle@pa.gov)

Still, "the DEP is not going to issue a draft permit with all of these outstanding compliance issues," explained GASP Executive Director Rachel Fillipini. "But once this permit goes out to public comment, you will most likely only have 30 days, and they will likely have a public hearing in Erie. It'll be very important for all of us to be there. They need to hear how Erie Coke has been as a neighbor. You need to let DEP know that you want nothing but the strongest permit they can issue.

"But that's not enough," she emphasized, "because you can have the strongest permits and regulations on the books, but if they're not enforcing them, it's just a piece of paper. So you need to ask not only for a strong permit, but also strong enforcement of the law."

Enforcement has been the focus all along. Nevertheless, it bears repeating, as one question posed to panelists on April 16 revealed.

"How are you going to drive your cars made of steel, buy appliances — again, steel, if you eliminate coke production?"

It's a valid question. But it misses the point.

"I don't think anyone here is advocating for the end of coke," emphasized GASP Staff Attorney Ned Mulcahy. "We're just asking people to follow the laws that are in place. Coke production, if done correctly, is an essential part of the modern economy."

"There are coke manufacturing operations in the world that don't pollute like Erie Coke," added Campbell. "It can be done cleanly. They're just not doing it here. We're operating here with 19th-century technology."

Fillipini explained that "One of the main issues with coke plants is maintenance. We're not talking about emissions from one smokestack. We're talking about leaking doors, leaking lids — there's a lot of leaking. So not letting things deteriorate is a big issue."

This same questioner also stated that "If you eliminate 1,000 jobs, that will not help revitalization. People will leave the Erie area in search of work."

Two things need to be addressed here. First, a source inside Erie Coke puts the number of employees between 100-120, including contract workers.

But I hesitate to include any number, because it implies that job loss is inconsequential if the numbers are small enough.

Neither is the collateral damage to public health and natural resources caused by ongoing pollution. Unfortunately, job loss is a lot easier to measure than public health damage — especially given the aforementioned lack of data.

Second, the possibility that people will leave Erie in search of work is legitimate — our population has declined again, and it's not hard to imagine why. But allowing a permit-violating corporation to continue unchecked is not the way to draw people here.

"Business leaders have to realize that they're not going to attract and keep valuable employees in Erie if it's not a good environment for them," Campbell said.

"We have good citizen turnout, and government is really starting to come onboard," added Lupo, referring particularly to unanimous support from both Erie City and County councils. "But what we really need are the business leaders in the community to also be involved."

Both encourage business leaders to speak as citizens and as representatives of their companies to DEP and EPA, saying, "We want this to be done right."

As Erie resident Brian Slawin concludes in the video by MenajErie, "Everyone should care. There's an economic element to this challenge, there's certainly a health issue to this challenge — and that will impact ultimately everything that we're all trying to do, which is to grow Erie into the best possible version that it's ever been."

Although we clearly need much more data regarding how Erie Coke's illegal emissions are affecting our health, we also need to step back and reflect — to really feel what it means that we're allowing these questions to go unanswered.

And then, to imagine another video someday soon that tells the story of how our community came together to ensure a healthy environment and vibrant economy for all of us.