The final show of the Dramashop Season

by Nick Warren
View ProfileTwitterInstagramRSS Feed
June 5, 2019 at 10:45 AM 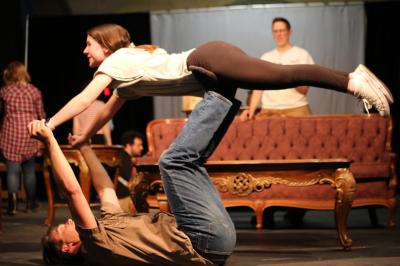 Erie's Dramashop theatre has always provided a finely curated selection of staged productions. The final show in its 2018-19 season is certainly no exception, with the Tony Award-winning musical Fun Home coming to Erie for the first time. Cartoonist Alison Bechdel, in her long-running strip Dykes to Watch Out For, created the world famous "Bechdel Test," a term that has since served to call out the male-dominated film industry (a film passes the test if two female characters have dialogue that doesn't center around a male character, a shockingly rare occurrence). In 2006, Bechdel published her coming-of-age autobiographical graphic novel, Fun Home. Much to the surprise of fans, the subtly penned comic memoir was made into an off-Broadway musical in 2013. It debuted on Broadway at the Circle in the Square Theatre in 2015, to nearly universal acclaim, the first Musical to win a Tony award made by an all-female creative team (and first to feature a lesbian lead), its score by Jeanine Tesori and Lisa Kron. It was also a finalist for the Pulitzer Prize in the Drama category. It centers around Bechdel, her coming out, and the relationship with her father, himself a closeted gay man named Bruce. Quickly becoming a paramount landmark of LGBTQ storytelling, her story resonated with audiences across the world. Dramashop's production stars Julie Lokahi, Anna McJunkin, Meghan Longo (as Bechdel at various ages), Ken Brundage (as Bruce), Gretchen Kerr, Parker Irwin, Justin Wesmiller, Michael Haas, and Brittney Shaw. It is directed by Artistic Director Zach Flock, its opening weekend already quickly selling out. — Nick Warren