Gaslight Goes Off at Erie Playhouse 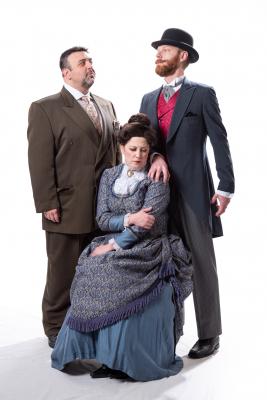 The suspenseful thriller Gaslight is coming to Erie Playhouse this month. The show follows Jack and Bella Manningham, a married couple, through 1890s London.

Gaslight was written by British dramatist Patrick Hamilton in 1938. The relationship he wrote for Bella and Jack gave rise to the term "gaslighting." Today, the phrase is commonly used to describe a form of psychological abuse in a relationship wherein one is led to question their own sanity.

Of this, director Carolin Lynn said: "The specific phenomenon is no longer valid in our world of easily accessible electricity, but the lesson about paying attention to the signs that things may not be as they seem is extremely valid."

Nonetheless, the dreary context of the play should not be a deterrent. On the contrary, Gaslight — starring Amanda Hurd as Mrs. Manningham, Chris Bucci as Rough, Teresa Testrake as Elizabeth, Hannah Richardson as Nancy, and Dan Stripp as Mr. Manningham — is a performance Erieites won't want to miss.

Bella is either going mad, or being manipulated by her husband. "(Bella) isn't quite sure who to believe, and her life as she knows it may hang in the balance of which side she chooses," said Lynn.

"The suspense is not in who did what, but how it will all play out, who will win,  and most importantly how," Lynn said. "The play comes to a satisfying end after an emotional roller coaster. Who doesn't enjoy watching that?"

Erie Playhouse is running a $17 special on general admission tickets for the opening weekend of the show.