Geeked Out: Kepler 452b Gives Us Hope

The discovery of Kepler 452b is something we should all be excited about. 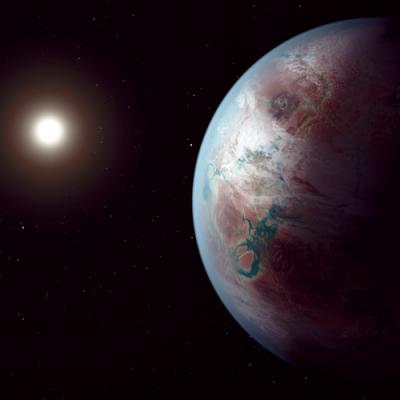 Recently, NASA announced the discovery of exoplanet Kepler 452b, which has since then been dubbed "Earth's older cousin." This is a momentous announcement for many space fans, but I want to help explain why a rock floating 1,400 light-years away nestled in the Cyngus constellation is a big deal for all of us.

Kepler is a spacecraft named after Johannes Kepler – the scientist who discovered the laws of planetary motion – that is currently orbiting the sun with the mission to observe other star clusters in search of Earth-like planetary candidates. Launched in 2009, The Kepler Space Observatory has had its ups and downs due to hardware failure, but in short, the spacecraft has been staring at stars in our galaxy in search for exoplanets. It is looking for planets that fall inside the "Goldilocks Zone" – circumstellar habitable zones, which, in this case, would be areas in which planets orbiting a star would have liquids pooling on the surface, just like Earth (you know, places where everything is just right).

How does a space observatory orbiting our sun discover planets orbiting stars that are just small dots off in the distance? It's pretty radical actually. The telescope focuses on a cluster of stars and observes them over the span of a few years – or in this case since 2009. As it observes the stars, it records the brightness of the light given off. What it is looking for is drops in brightness as planets transition in front of that star. They then wait for the planet to transition again to remove any doubts of passing celestial bodies. After a year, you know how long it takes for the planet to orbit, and the change in the stars' brightness lets scientists determine the size, position, and orbit of the planet.

Here's another explanation. Turn on a flash light and point it at a wall. If you bounce a ball in front of that flashlight, the light on the wall will dim slightly as the ball passes the beam of light. If you compared the light value of those two states, you can science your way to knowing the size of the ball.

So that's what NASA has been doing with the Kepler Mission. But what does this mean?

Well, we know that planet Kepler 452b – the "b" indicating the planet and "452" referring to the star – is roughly 60 percent larger than Earth. It is the smallest exoplanet we've discovered to date that is orbiting in the Goldilocks Zone around a star that is similar to our sun. Research suggests that it may have a rocky composition, like Earth. It has a yearly calendar that is 385 days. Its star is 1.5 billion years older than ours and has the same temperature.

While the Kepler Mission has discovered thousands of candidates, only a handful have been confirmed exoplanets that orbit in that precise zone. Kepler 452b is also the first discovered planet that is close to the Earth's size, as all previous confirmed planets were significantly larger, significantly younger, or too close to the edges of the habitable zone. Since Kepler 452b is older than Earth, it raises questions of the potential of life existing there. With 6 billion years to work with, the likelihood of life existing there seems significant and is what is driving much of the excitement for space geeks like me.

For the more pragmatic science fans, knowing that we have discovered yet another potential Earth-like planet can be reassuring. For a long time, it was difficult with current technology to discover small garden worlds like ours; finally, we know, we're not an anomaly in space.

Will we ever see this planet – and whether it has, is, or could support life – in our lifetime? Consider the following: Kepler 452b is 1,400 light years away. Right now the fastest moving spacecraft is the Voyager 1. Shot out into space 37 years ago, it is traveling at its max speed of 38,610 mph or 11 mps (miles per second). The speed of light is 670 million mph. So our fastest space craft only travels at a fraction of the speed of light, and even if we could travel at the speed of light, it would still take 1,400 years to get there. So based on our current technology, it doesn't look like we'll be booking trips there any time soon.

Regardless, this latest discovery gives us hope of finding even more Earth-like planets out there in the night sky. It's discoveries like these that help fuel the creative spirit that leads to scientific breakthroughs. And each discovery helps us understand more about our place amongst the stars.