Geeked Out: The Interview

The was a lot of controversy surrounding the release of The Interview, but was it all an elaborate marketing scheme? 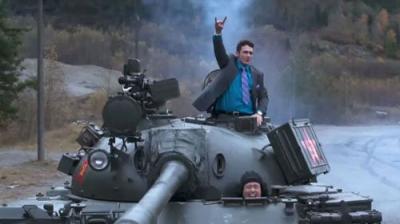 Some of you may have been distracted from roasting chestnuts over an open fire by the story surrounding the awkward release of the latest stoner comedy The Interview. Whether or not you were, let me get you caught up on what I am now labeling as one of the weirdest and most compelling marketing campaigns for a movie ever. At least I think that's what it was.

This story – the story behind the story – has it all: hackers, politicians, actors, constitutional rights, and poop jokes. The Interview is the latest from the comedic acting combo that is Seth Rogen and James Franco. Previously, these two busted up a drug lord in Pineapple Express and survived the "Rapture" in This Is The End. Their screen-time together dates back to the TV series Freaks and Geeks, which debuted in 1999, so the duo's chemistry's been well honed over the past fifteen years.

The two work together in their latest comedy as a talk-show host – Franco – and a television producer – Rogen – who get invited to North Korea to interview Kim Jong-un, who's a super-fan of Franco's Entertainment Tonight-esque program. Then the CIA gets involved and asks the affable misfits to "take him out," since they'd have unfettered access to the communist dictator.

As it turns out, North Korea didn't appreciate being the butt of the joke.

Threats were made followed by more jokes – which had everyone laughing. Everyone but some  hackers, I suppose. But I feel this is a good point to make: Political satires with living dictators are old hat.

Back in 1988, we watched Leslie Nielson kill all the living dictators and anti-American agitators in the first 3 minutes of Naked Gun. Gorbachev, Arafat, Castro, Amin, and Gaddafi all got trounced by a police lieutenant using his bare hands. And then there was the cult hit Team America: World Police, in which Trey Parker and Matt Stone use marionette puppets a la Thunderbirds to reveal Kim Jong-il as an alien cockroach. Simpler times… but I digress.

The series of events that followed involved a breach in Sony's corporate network, which they claimed to be North Korean hackers looking to damage the company and make good on the previously mentioned threats, around Thanksgiving. While North Korea denied the attack, it applauded the work of potential "righteous" supporters by giving Sony a proper "neener-neener."

Then the media, now with its hands on droves of leaked emails, had a feeding frenzy. Meanwhile, The Interview media appearances were slowly scaled back – until on Dec. 16 a threat was made against all theaters set to show the film. Seth Rogen and James Franco canceled all planned promotional appearances and some theater chains pulled the film. Soon after, Sony called off the theatrical and video on demand release of the film altogether.

Remember, this whole mess is over a dick-and-butt-joke film overladen with drug use and low-brow gags. This would be crazy enough if it had stopped there, but it didn't…

Before long, you had actors/politicians/unsolicited strangers shouting about freedom of speech and how we can't cave to unsubstantiated terrorist threats, going so far that President Barack Obama weighed in and called Sony's actions misguided for backing down. Over a stoner flick!

The U.S. government then began looking to prove there was a link between the North Korean government and the original hack. But again, it didn't just stop there. On Dec. 22, all of North Korea lost access to the Internet. Rumors spread that the U.S. was behind the outage. North Korea's Internet access was restored the following day – and if you are still following this mess like me, you are wondering… what the hell?

Sony – then pressured by fans, actors, moviegoers, and the U.S. President – announced Dec. 23 it would release the film in theaters and online on Christmas Day after all. So I did what any geek columnist following this story would do: I immediately rented the movie through YouTube and watched the film. And even though my wife joked about us getting hacked or bombed, we're both – unsurprisingly – still here.

If you are a fan of Rogen's and Franco's previous work, then The Interview is more of that same lewd, absurd humor they have been crafting over the years. I guess now if you wanted to, you could also watch it with some weird sense of American pride knowing that freedom of speech won in the end.

But after keeping tabs on the developments surrounding The Interview, I've come to believe that this was all just an amazing, well-orchestrated advertising campaign that won't be topped for years to come. We will look back and talk about that time the President chided a film studio to release a film that had an actor shoving a potato-sized metal container up his butt. Because that seriously can't be something that riles up chaos on a global level, resulting in threats and public admonishment of production companies from politicians, right?

Yeah… Only in America: That's the real story.