Geeked Out: To The Red Planet! 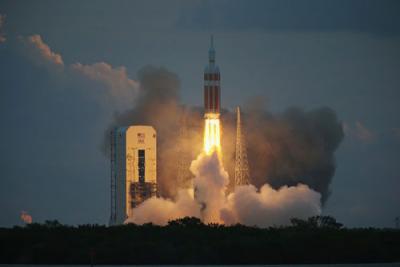 We're going to Mars, baby! NASA gave space nerds chills this past week when it announced plans to get manned missions to Mars by 2030. In its announcement, NASA went over exciting technologies required for this task, some of which are already in existence today.

It has been almost four years since the Space Shuttle Discovery's last mission came to a close – a bittersweet moment for many of us, as we witnessed the shuttle land for the last time.

While the Discovery was a symbol for many of us by helping to build the International Space Station (ISS), it had flaws that prevented it from being used for any mission outside low Earth orbit. For example, the Moon is outside low Earth orbit. With Discovery's wings and tail fin technology, it simply couldn't be a candidate for traveling deeper in space. Also, the heat shields used for the shuttle's reentry were designed for returning to Earth at the slower speeds of low orbit.

Thus, retiring the spacecraft was necessary in order to free up funds to develop the next great space craft.

Enter the Orion MPCV (Multi-Purpose Crew Vehicle). The design of the Orion is specifically for deep space exploration and operations. Where Discovery could only be out in space for two weeks, the Orion can be there for 900 days. This is the spacecraft that will take astronauts to Mars – and back. It also has a brand-new heat shield that makes the old Apollo heat shield look like a baking tray.

While it might be easy to overlook the great strides in space exploration, let me help you get caught up on all the amazing operations happening in our solar system.

From "Journey to Mars," which was the biggest announcement at the press conference where NASA laid out the rest of the project including the Curiosity Rover landing back in 2012, to the latest weather satellite Mars Orbiter Mission (MOM) that successfully entered Mars orbit in November, big things are on the horizon. One of the larger takeaways from the press conferences was how the newly unveiled Commercial Crew program is helping pave the way for NASA to focus solely on deep-space exploration.

Commercial Crew is NASA's new program where companies, like Lockheed and SpaceX, bid on transporting  astronauts to and from Earth and the ISS. With the private sector participating in commercial spaceflight, NASA has been able to shift funds to develop new technologies, such as Solar Electric Propulsion, improved communication arrays, and better launch-failure systems to save lives in the case of a catastrophic emergency.

The other key aspect to the Orion is the Space Launch System, or SLS, rockets. Back when I wrote about Kerbal Space Program, I mentioned these big daddies. These rockets have the capability to move up to 154,000 to 280,000 pounds of payload. The SLS is roughly the same height (385 feet) as the Saturn V rockets that we used during the Apollo missions. SLS, however, is highly adaptable to suit the various missions over the next 30 years.

It's an exciting time for space exploration again. Recently, we had the massive and amazing Rosette Comet Landing, where the European Space Agency (ESA) finally landed a probe on the surface of a passing comet. This feat had been 12 years in the making and required several Earth gravity-assisted boosts to get the satellite to rendezvous with the comet. At one point, the satellite carrying the Rosetta probe passed Jupiter's orbit. THAT IS CRAZY!

There's once again reason – and jubilation – in looking up to the stars, as we are beginning to reach out further than ever before. One of the great discoveries from the Rosetta mission was the prevalence of carbon on comets, which is beginning to confirm our theories that comets are the universe's instigator of life on planets. We know that Mars at one point was a habitable planet, with lakes and rivers. Mars has ice and all the natural elements needed to make rocket fuel. This removes the previously held belief that we will need to bring raw materials with us in order to synthesize rocket fuel for the trip back home.

The most exciting part is that this is all being accomplished with a severely underfunded NASA – which only gets a measly $17 billion of our federal budget. To put it in even better terms to understand how little money this is, NASA makes up only half a percent of our total federal budget. Imagine how much sooner we would be to Mars if that number was just double, taking up only 1 percent of our total budget.

For now, just go watch Total Recall and say it with me: "Here is the plan: Get your ass to Mars!"