There was before. Something was lacking, something was needed--the city could feel it. This is after, and this is Gem City Gallery and Apparel 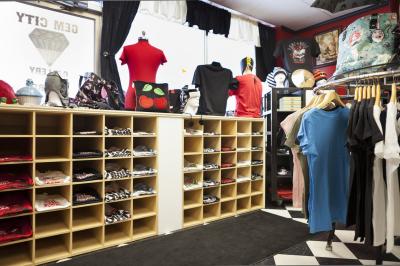 There was before.  Local economy struggling to pick itself up out the ditch. Unemployment swelling, affecting everyone, leaving no exceptions among artists or businesses.

There was before. Choices were limited. The mall. The Internet. Sure, a mall: a large venue with over 160 stores, and the World Wide Web with over, well, more corners than can be counted, but something didn't feel right, something didn't fit. Erie lacked a local choice, somewhere to turn to for something different, a place for subculture artwork, apparel, and more.

Enter Gem City Gallery and Apparel, a new shop located at 3711 Poplar St. and enter owner Ashley Sornberg and her husband Donny. This is now, this is the after, and this is Erie's place for something tailored for those looking for something different.

Located next to Mid-Town Tattoo, Gem City Gallery and Apparel opened its doors December 3, 2011 as a shop selling T-shirts, paintings, candles, jewelry, and more. And it's no coincidence that it shares a door with Mid-Town.

"I've owned Mid-Town for the last four and a half years, but we don't tattoo," Ashley says of her and her husband, who aren't artists but employ their creative talents elsewhere.

"They're both collectors [off tattoos] too so that's probably what inspired opening a tattoo shop," injects friend and avid shop supporter Kerrie, whose husband, artist Eerie Eric, tattoos at Mid-Town. Kerrie is bringing sales experience to Gem City as she previously ran a merchandise shop in Canada. She says she's glad the new store is able to support the local scene and is glad people can collaborate and work together in support of each other.

"I was a customer first," she adds. "I know how I want to be treated."

Bringing that approach—a sincere kindness to customers—won't be new since that's been how Mid-Town's managed its place in the tattoo community in Erie, as Ashley says they're more than happy to talk to anyone about any ideas they might have.

Before deciding to open a tattoo parlor and then a gallery/apparel shop, Ashley worked for a doctor's office for over 11 years before going part-time and then eventually quitting as she invested her full time in the shops.

"I didn't just want to be an owner," says Ashley, who employs her creative talents as a "working owner" focusing much of her creative talents in Gem City. Overall, Ashley says that she and her husband want to support our local artists, crafters, and designers, which is how she gets to exercise her creative muscle. "The goal would be to have at least 50 percent local-made," she adds.

Currently, some of Gem City's biggest local sellers include Oregon Candle Company, jewelry from local artists like Jen Minor of Catalyst Tattoo Studio, and shirts from artists at Mid-Town. Ashley said they plan to increase the local offerings as they increase the merchandise produced from those working at Mid-Town, as some artists are developing clothing lines.

"They are very much involved," she says of the artists who work at Mid-Town. "This is new, and they never had this at any other shop that they worked at, so this is new to them. They're really excited to expand the horizons basically. We want to give them as much support as possible. That's why we mainly opened this to see what else we could do, get their designs out."

Without a place like Gem City—or people like Ashley—artists wouldn't have a place for their art or people to promote it to get it the exposure it needs, which makes this a perfect fit for a city looking for something new to try on.

"We are doing this to help our economy, our artists—just Erie in general," she adds. "My husband and I have a long-time goal, not to make a killing, but to stay supportive to our artists. By opening our store, we are giving the opportunity for people of all sorts of style. My husband has built an amazing tattoo shop and merchandise store. We have provided a place for our talented artists to work out of, and we just want to show much more we can do to support them and Erie."

Hours of operation: noon to 7 p.m. Monday; noon to 9 p.m. Tuesday through Saturday. For additional information, call 453.4550 or visit their Facebook page.