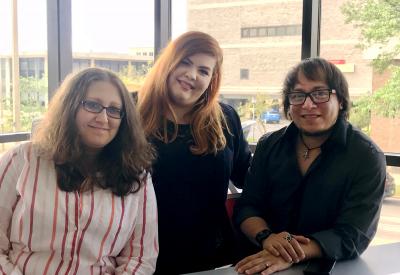 Contributed
The team at United Aircraft Technologies u2013 Rhiannon Reynolds (left), Evaguel Rhysing, and Darian Rhysing u2013 developed a lightweight interconnecting clamp that has the potential to replace the heavy metal clamps used in everything from Black Hawk helicopters to commercial airplanes. Investors are noticing, as the company has garnered the support through the Sikorsky Innovations Entrepreneurial Challenge and the Secure Erie Accelerator.

That is exactly what the founders of United Aircraft Technologies (UAT) did. For 12 years, Army veteran Darian Rhysing served as an aircraft electrician for the Army and Navy — working on Black Hawk helicopters and Boeing Chinooks. As a result of the repetitive stress he experienced installing metal clamps used in aircraft wiring, he now lives with permanent carpal tunnel syndrome.

However, inside every problem lies an opportunity.

Darian and his wife and partner, Evaguel Rhysing [who is also an entrepreneur, with a passion for physics and aerodynamics — and fluent in four languages], ultimately developed a lightweight interconnecting wiring clamp to replace the heavy metal clamp that is currently used in everything from helicopters to commercial airplanes. Once fully utilized, this device will help improve fuel economy, increase safety for the aerospace industry, and decrease the occurrence of repetitive strain injuries among the workforce.

And today, this veteran-owned, woman-led business is starting to make a big impact in the aviation industry.

I had the opportunity to meet the group during their time with the Erie Innovation District's Secure Erie Accelerator (SEA). SEA companies go through an extensive pre-vetting process, and ultimately out of the near 100 applications received, only up to ten are chosen. This year, there were seven. Each is provided with a financial investment and given training, mentoring, and networking opportunities that will hopefully help scale their business. This year's cohort showcased companies from Troy, New York to Varna, Bulgaria. The hope is that some will remain in Erie. Last year, five companies stayed in some capacity.

As the final week of the accelerator came to a close, I sat down with Evaguel (founder and CEO), Darian (founder and CTO), and Rhiannon Reynolds (business developer). We met on the second floor meeting room at Velocity Network headquarters (which houses the Innovation District). Surrounded by the natural light drawn in from the floor to ceiling windows that surround the room, I perched upon the high desk while the others nestled into the contemporary half circle sofa to talk about all things UAT and Erie. Having very little knowledge about the aviation industry, I wanted to know more about the product — but also how they got here, and where they were going next.

Evaguel tells me, "We were looking for an accelerator focused on defense. There are currently not many resources, and Darian came upon the Secure Erie Accelerator and we decided to apply. We were already active in the accelerator ecosystem and had met the founder of SimpleSense (part of last year's SEA cohort) through the MassChallenge." MassChallenge is a global, zero-equity startup accelerator where companies selected represent the top nine percent of high-impact and high-potential startups from around the world. After UAT made the final round for SEA, "We opted to come to Erie when we learned about the many opportunities for plastic manufacturing."

I learned that this is no small project. Because aircraft modifications and repairs come into play every 90 days, the wiring bundles held by clamps have to be undone and reattached over and over, and one can multiply that by thousands. According to Darian, "A Black Hawk helicopter needs over 1,000 metal clamps and a commercial-size airplane such as the 737 or Airbus needs up to 20,000 or more clamps." UAT's design does not require the use of hardware and makes it up to 65 percent lighter than its existing counterparts.

"One of the things that got us excited and really opened up our minds to seriously consider moving part of our operations to Erie, was when we toured Plastek," asserts Evaguel. "We had toured several other facilities but none of them have compared to the facilities that Plastek offered. And while the capabilities they have are important, they are also family-oriented and received us with such a warm welcome."

The three of them note that this project will unfold in phases, and there will also be a "smart" version of the clamp. Plastek will be working with engineering students at Penn State Behrend to help develop the technology to go inside the clamps. "It's an amazing collaboration with Penn State. They sponsored a plastics program with the university, and one of the research projects is to develop the equipment for us," Evaguel tells me.

The smart clamps will be part of an augmented reality system to pinpoint where wiring has issues and needs to be repaired. "In the end there will be two different styles as not all clamps need to be smart. We also plan to have the clamp fully certified by the end of the year." Darian notes. The group is also currently working with Ben Franklin Technology PArtners. Evaguel adds, "Once we secure additional funding, we will also be looking at taking more operations to Erie."

"Many of our entry points have been through Sikorsky. We plan to use that connection to hopefully expand into Boeing [one of their partners] and get into commercial aviation." Back in 2018, UAT was an awardee of the Sikorsky Innovations Entrepreneurial Challenge (owned by Lockheed Martin), which is designed to accelerate innovators and disruptive technology concepts with applications for the vertical flight market. Sikorsky manufactures the Black Hawk helicopter — which is UAT's initial test market.

Moving from technology to Erie, I inquire about their experience in our fair city.

"I really love it here," Rhiannon tells me. "I didn't even know it existed before the accelerator, but I was surprised by the quality of the beaches and there are a million things to do. The amenities are pretty great for the city of this size."

Evaguel adds, "Getting to know folks was the best part — everybody here is connected, very welcoming, and they opened their doors to working with us. All of this and the connection with Penn State Erie, made us feel very welcome. It was one of our best experiences — normally you don't encounter that. Oh, and the tour of Wabtec was great too — we loved the opportunity and learning more about the locomotive history."

Rebecca Styn is VP of Ventures at Erie Innovation District and is the proprietor of Room 33 Speakeasy. She is also completing her Ph.D. in Leadership and Organizational Learning from Gannon University. Follow her on Twitter at @rstyn.