The web design, marketing, and branding agency celebrates a milestone 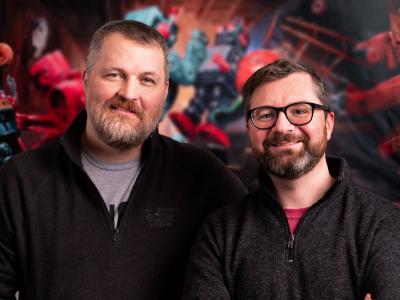 Contributed
Werkbot co-founders Jay Richardson (left) and Brian Amick (right) have exceeded the lifespan of most small businesses by following a model that emphasizes collaboration, trust, and creative thinking internally and externally. The website design and creative marketing firm celebrates its 16th year in 2020.

Fifteen years ago Brian Amick and his partner Jay Richardson founded Werkbot, a website design and creative marketing firm. What began as a team of two in 2004 has blossomed into a company of 13 full-time employees, and a group that prides themselves on building long-term relationships over short-term gains. I had the opportunity to sit down and talk with Brian at Radius CoWork in the heart of Erie's entrepreneurial ecosystem, the Renaissance Centre. I had just run up nine flights of stairs, because the lobby of the building, where Werkbot and the Erie Reader are housed, was riddled with employees waiting to get on the elevator. For a moment while I was standing in the gilded lobby, I felt like I was in a true big city high rise, until I quickly realized only one elevator was working. So, I opted for the next best thing — the stairwell (I found out Brian had already done this twice that day). When we connected, I talked with him about all things Werkbot — and moreover, wanted to know, in a world where 50 percent of small businesses fail within the first five years, how did Werkbot not only survive, but thrive?

Rebecca Styn: Why don't you start by telling me a little more about your firm?

Brian Amick: Really it comes down to inspiring organizations to own their digital space. We are a full-service creative agency focused on website design, branding, custom development, and ongoing marketing support for leading companies in their field. We have a passion for helping businesses create digital assets that outperform competition. We do this by promoting collaboration, trust, and creative thinking internally and externally. Over the years, we've discovered that these values help to create a positive environment and promote great teamwork with our clients.

RS: What made you start your own business?

BA: I never truly wanted to venture out on my own. I always kind of aspired to work at a New York or D.C. style ad agency; rise up to the ranks of art director, creative director, etcetera. There was an article that I actually have thumbtacked up on my bulletin board in my office now by the AIGA — American Institute of Graphic Artists — but it's "What Planet are you from? Print Designers are from Venus, Videographers are from Mars." And at my previous place of employment, where I was at roughly four years, I began to realize that many full service agencies in the early-mid 2000s were not grasping interactivity in web [design]. A jack of all trades is the master of none. And as a designer/front-end developer, it was a frustrating time period where some of the more important aspects of web were overlooked. Jay and I had jobs that were roughly in the fields we enjoyed and wanted — but we weren't satisfied. We really wanted to build a company where we were inspired by the work we were doing and could help work with clients that we could inspire.

RS: You recently celebrated 10 years in your current location at the Renaissance Building. Why did you originally decide to move downtown?

BA: Initially, people thought we were crazy. They asked why we would move downtown. They claimed there was crime, and nothing was going on there. But from my perspective, we were moving into the tallest building downtown, with a nice view. I believe it made us look like a bigger company. And at the time there were three of us and now there's 13. So, we have come a long way in that space.

RS: Did you experience "a valley of death" somewhere in that time frame? I mean to be around for 15 years is rare. Many entrepreneurial ventures don't last that long.

BA: There's always been ebbs and flows. I remember talking to you a few years after we opened about the frustrations I had at the time with owning a company — during times where it was a lot of work, but not a lot of reward. You have to make a lot of sacrifices to help build something greater than you.

RS: What is one of your favorite parts of your job?

BA: Over the years, it's gone from micromanaging myself — trying to have a piece of everything —  to letting things go more so that I am able to focus on the business, not in the business. I still have multiple roles, and I do love multitasking in many ways, but it's important to kind of help steer the ship looking forward and not always looking back. So ideally, I lean towards the vision of the company and understanding that business isn't really a game from a traditional standpoint, not with a beginning, middle, and end. It's more of an ongoing process where you keep an eye on the prize, and that prize can continue growing and moving and changing.

RS: Much of your team has been with you for the long haul. To what do you attribute their commitment?

BA: I think creating a positive culture that is focused on them, their family, and their needs outside of pure short-term profitability. It's more important for us to be happy or work on becoming happy as individuals and people and being around people who have the same goals as far as growth and quality of life versus kind of the task masters who just want to get things done. After all, when you spend 90,000 hours of your life at work, it needs to be a place people want to come and support. It all goes back to building a long-term sustainable company. You never go for quick money versus that long-term stability.

RS: We know entrepreneurial efforts are not linear. So, when you originally started your business, did you have to pivot or change direction at all?

BA: We still have the same vision as we have always had — to inspire the businesses and organizations we work with to become optimistic about their website, brand, and marketing. At the same time, technology's changed. We produced so many Flash websites at the beginning and largely focused on creativity, but not as much substance. Today, websites are the core marketing piece for most businesses, so it's taking those other channels out there and driving it back to the site and creating measurable results that help inform business decisions. We also focus on accessibility and ADA compliance trying to build sites for all. It's an ongoing adaptation.

RS: For the aspiring entrepreneur, what is your best advice?

Rebecca Styn is VP of Ventures at Erie Innovation District and is the proprietor of Room 33 Speakeasy. She is also completing her Ph.D. in Leadership and Organizational Learning from Gannon University. Follow her on Twitter at @rstyn