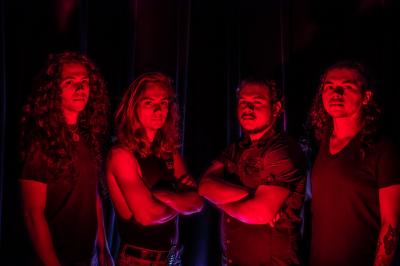 Up-and-coming metal monsters Tyrant are coming to Erie and inviting along locals Obelus, Perdition, Neuroticism, and Raven's Law for a night of pure metal tyranny at Basement Transmissions.

Tyrant (proudly out of Lansing, Mich., and not to be confused with any of the countless other bands named Tyrant in the vast metal scene) started in 2011. Its first demo, Jaws of Agony, was released in 2012 while founding brothers Philip and Andrew Winters were still in high school. From there, the group worked its way through two well-received EPs before finally releasing its debut album, The Pact, in 2018.

This young group is noted in online circles for its intense energy and stage presence beyond its years. Tyrant also cites a wide range of classic bands in many rock subgenres as influences on its work — from Metallica to Rush, and Testament to Pantera, Strapping Young Lad to Led Zeppelin. These wide influences can be found all through the band's repertoire, as its blend of sound features components of speed metal and thrash, as well as utilizing hard and heavy breakdowns and melodic elements.

Rounding out the lineup are four Pennsylvania-based hard-hitters. Perdition is playing its second show of the year, bringing the symphonic death metal it has been honing since 2008 with it. Neuroticism out of Oil City is a newer groove-metal band featuring thrash elements. Raven's Law recently came out of hiatus with a new lineup and EP, and the group still maintains its status as Erie metalcore masters. Obelus is also back for its second show of the year and continues its creative edgy grind-death metal sound. — Ellie Brooks