Get Ready to DNCE at Gannon University

DNCE presents an opportunity to let loose toward the end of the second semester. 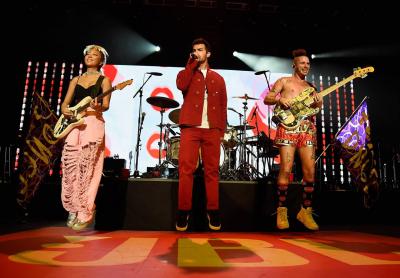 Spring concerts are an interesting phenomenon in the context of local college life. Traditionally taking place every other year to save for expenses, there's a healthy sense of competition between Erie's universities to see who can conjure the biggest name, drawing in not only students and staff but the public as well. This year, Gannon University has given the competition a run for their money as they prepare to host funk-pop stars DNCE at their very own Hammermill Center.

Formed in 2015, DNCE is most notable for being fronted by Joe Jonas, current Jonas brother and former member of The Jonas Brothers. The band worked quickly to release their debut EP, Swaay, in October of the same year, featuring the two radio smash hits that would go on to define the current era, "Cake By the Ocean" and "Toothbrush." The singles would eventually be included on the band's first full length record, DNCE, released just a year later on November 18, 2016. Reactions to DNCE and their early work have been positive, with many critics noting the band's diverse style and lighthearted, dance-centric songwriting.

"At the end of the school year, when students are most stressed about finals and graduation, we really need something fun like this concert to keep morale high," says sophomore Teddy Rankin. "It's a great way for the university to connect with its student community and allows for us to blow off some steam."

Many Gannon students have been vocal about their surprise and excitement regarding the university's ability to bring an artist as popular as DNCE to Erie. For them, the spring concert presents a much-needed opportunity to let loose toward the end of the second semester. — Aaron Mook

Erie Organizers Call for Charges Against Protestors to Be Dropped