Getting Homesafe at the Avalon

Homesafe plays an amalgamation of styles, including emo, pop, punk, and rock, while they return to Erie at Lola's Lounge. 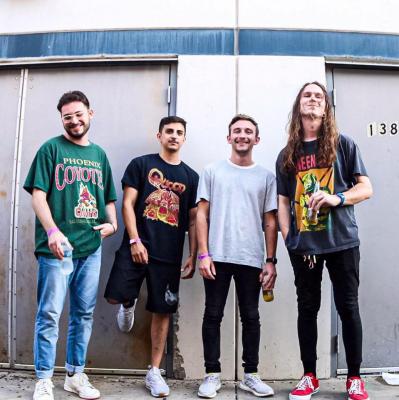 Homesafe is coming back to Erie, playing alongside Locket, Bogues, Elbow Room, and Nick DiNunzio at Lola's Lounge, presented by the Andromeda Agency.

Homesafe started in Oak Lawn, Illinois in 2014 as a side-project of Knuckle Puck bassist Ryan Rumchaks, who took up the role of singer and guitarist for his new band. Since then, the outfit has released three EPs and one full-length album in an emo-meets-pop-punk-meets-rock amalgamation of styles (emo and pop-punk have become almost indistinguishable in the past few years) and has grown in popularity with each release, transcending side-project status. In June of 2019, Homesafe released two singles, "Save Me", and "Without Warning", the latter being accompanied by a music video. In these tracks, the band mostly abandons their pop-punk influences and replaces them with a more '90s alternative rock vibe, while still maintaining a touch of emo.

Tour support for Homesafe comes from Toronto alt-rock band Locket and Nashville indie solo artist Bogues. Locket released their debut album, All Out, this year on Fearless Records, with music videos for "Out of Sight", "First Blush", and "Hunnie." Bogues released his music video for "South for the Summer" this past October.