by Cory Vaillancourt
View ProfileFacebookTwitterGoogle+RSS Feed
June 25, 2014 at 7:00 AM 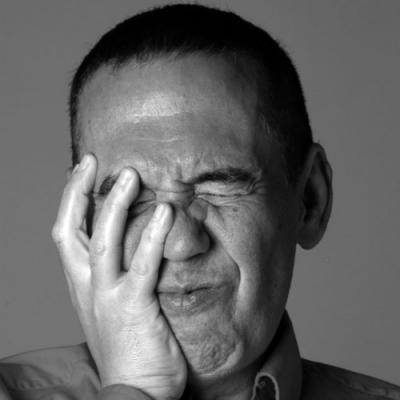 'Subtlety' is a word not oft associated with comedian Gilbert Gottfried – his jarring delivery and his unwillingness to adhere to the "too soon" convention have fashioned him a reputation as one prone to shocking people with jokes about Sept. 11 and the 2011 Tōhoku earthquake and tsunami (for which he was fired from a duck-helmed Aflac ad campaign) in a nasally grating tone.

However shocking this may be to those who don't understand that "too soon" is the punch line, Gottfried's actually been talking to your kids for years now, most notably as the parrot Iago from Disney's Aladdin.

When he talked to me – at 9 a.m. on a Saturday morning – we reflected on such duplicity, as well as getting arrested in drag, The Beatles, hand lotion, and old-school show business.

Cory Vaillancourt: So we're early risers today. Why do you let your people do this to you?

Gilbert Gottfried: Yeah, it's just inhumane what we have to put up with, waking up before noon.

CV: I hear ya. Have you ever been to Erie before?

GG: It's a weird thing – I never remember places that I've worked or cities I've been to; there are places, entire cities where I swear I've never been before and then I get to the club and I've signed their wall. So for all I know I was in Erie, Pennsylvania, working, just three days ago.

CV:  Well, we're glad to have you back, regardless of whether or not you've been here before.

CV: I really enjoy your material, and I wanted to ask you a little bit about that creative process. How do you write your jokes?

GG: [Laughing] I certainly don't plan very well. Anything in my act is something that came to me at one time or another, or over a period of time. But the actual sitting down – I've written some articles; I have an article that's coming out in Playboy next month – with articles or the book I wrote, I had to sit down and write, but as far as my act, I never had that good work ethic.

CV: What can you say about a media that survives by pushing this shit to the front page but then crucifies you for saying it?

I think people like the idea of being offended.

CV: Even going back to a guy like Don Rickles.

GG: Oh yeah! But now, especially with the Internet, it's like you could say, "I like jelly beans" and you'll get people outraged.

CV: With all that being said, how much duck do you eat each year?

GG: [Laughs] Yeah, no, I've crossed that off. I do enjoy walking through Chinatown seeing the ducks hanging on the hooks though.

CV: Your professional life has not been without scandal, but your personal life – as far as I know – has been remarkably scandal-free. If you were to be involved in some sort of personal scandal what kind would it be?

GG: I think finding dead bodies buried under my floorboards, and I'd be arrested in full drag.

CV: While running for U.S. Senate.

GG: And chicken blood all over my walls. I'll be writing, "Praise Satan."

CV: That brings up another good point; there's amazingly little information about your private life out there. How have you been able to keep it so private?

GG: Well, the reason there's very little about it and I've been able to keep it private is that there's nothing really all that interesting. That's the problem. If I had a more interesting private life, it'd probably be all over the place.

CV: So what do you do when you're not working? How do you keep yourself happy?

CV: Or is this going back to your personal scandal?

GG: I keep myself happy by always having a good supply of hand lotion.

CV: Smooth. Now, you've been around a while, you've seen a lot of people and worked with a lot of people. Who do you think are the up-and-coming or the next generation of comedians in your style?

GG: Wow, I don't know [pauses]. See, it's hard for me to watch comedy, like stand-up comedy – for me, watching comedy is like going to work on your day off. When I watch a comedian, at the very best I can go, "Oh, that's clever." You're more critical of it, not like an audience member.

CV: So who have been some of your favorite people to work with over the years?

GG: No one in particular. I hate all of them. [laughs]

I mean, I remember like a thousand years ago when I did the scene in Beverly Hills Cop 2, working with Eddie Murphy was fun. We had a lot of laughs during that scene, because we were ad-libbing. There's been a lot of people...John Lenn... Oh, I was going to say "John Lennon," like, yeah, back when we wrote Sgt. Pepper together [laughing]. No, I meant John Ritter. John Ritter was nice to work with.

CV: And what have you got going on now? You mentioned Playboy. Books, TV, Internets?

GG: Well, I still have a book and DVD on my website, gilbertgottfried.com, and my Twitter @realGilbert, but right now I have a podcast called Gilbert Gottfried's Amazing Colossal Podcast that you can subscribe to on iTunes. And that's been doing well, ratings-wise, at least from what I can make of the numbers. I interviewed Dick Cavett, Jeff Ross, a bunch of people. And mainly, I like finding out more of the connections to "old" Hollywood, so I interviewed Sara Karloff, Boris Karloff's daughter. And that was interesting, like whenever you feel like you can get some connection with classic showbiz... and this comedian Marty Allen...

GG: Allen and Rossi! Yeah! You know them?

CV: I do! My dad lives in Vegas, and he used to bump into Rossi out there all the time. What's interesting is that they were there when the Beatles made their first appearance on Ed Sullivan.

CV: Supposedly Rossi's good friends with Paul. They hang out.

And to me that's just jaw-dropping. I would love to have eavesdropped on some of the conversations those two had.

CV: Well, let's wind this up so we can both get back to bed.

CV: What can people expect from your show here at Jr's Last Laugh at the end of June?

GG: They can expect to sit there for about five minutes, look at each other, and say, "Who's idea was it to see Gilbert Gottfried?!"

Gilbert Gottfried is scheduled to perform at Jr's Last Laugh on June 26, 27, and 28. For tickets, visit jrslastlaugh.com.