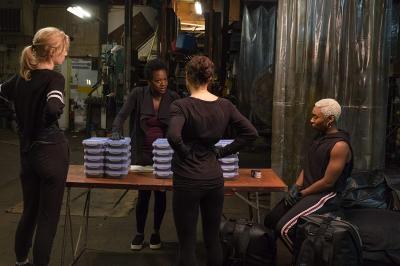 Steve McQueen is a director that hasn't really clicked with me yet. He's a talented filmmaker to be sure, but with the exception of the great 12 Years a Slave, I find his style too bombastic for somber, contemplative dramas. His new film Widows, however, intrigued me because it is a heist film, the kind of story that absolutely requires bombast. The film manages to rise above its genre cliches thanks to slick direction and some fantastic performances.

Based on a 1980s British television series of the same name, the film updates its story to present day Chicago and follows four women who find themselves trapped under the debt of their dead husbands' criminal activities. With nothing to lose, these women decide to plan a big heist in order to pay off the debt and forge new lives. However, as with all caper films, there are twists around every corner and nothing is ever how it seems.

McQueen has a lot of fun with the film's pulpy, high-stakes story, but he also manages to make a few clever allusions to political corruption and the massive economic inequality found in America. The story can be sometimes a little too convenient and the dialogue is occasionally risible, but the film makes up for it with spectacular cinematography (including one ingenious tracking shot set entirely on the hood of a car) and stellar performances by the ensemble cast, with special shout-outs to Viola Davis, a coldly sinister Daniel Kaluuya, and a star-making performance by Elizabeth Debicki. If you're interested in a crime caper with a little more to say, check it out. — Forest Taylor

Nazis and Zombies and Mutants! Oh My!: 'Overlord' is a Gory Good Time