Nazis and Zombies and Mutants! Oh My!: 'Overlord' is a Gory Good Time 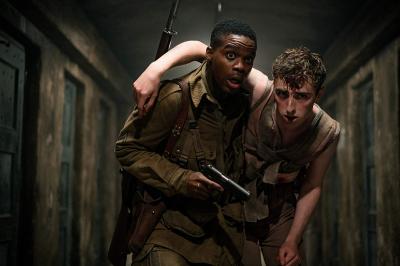 Audiences in this day and age seem to be obsessed with realism in films. Movies can be about the craziest subject matter imaginable but there has to be some kind of explanation for how it all happened or else the audience may turn on the film. It can be exhausting, and sometimes I'd welcome more films that just revel in their ridiculousness. Suffice to say, this is all a segue to rave about the new action/horror hybrid Overlord which doesn't care one iota about how ridiculous it is. It's a story plucked right from a dime-store pulp magazine. It's Saving Private Ryan reimagined as a part of the Resident Evil series and it's a fun time at the movies.

Taking place the night before the D-Day landings, the film follows a group of American paratroopers caught behind enemy lines who must trek to a small town in order to blow up a radio tower in a church. Unbeknownst to them however, this town is being used by Nazi scientists to create a new secret weapon: an army of horrifying mutated creatures who are nearly unstoppable.

After an absolutely thrilling opening, the film takes its time getting to the good stuff, but once it does, it never lets up. With some fairly well-choreographed battle sequences, truly stomach-churning body horror and some creepy imagery straight out of an E.C. horror comic, the film is a treat for genre fans. There isn't much in terms of character, everything is heightened from the over-the-top acting to the over-the-top gore, and the story is bare bones. However, for some brutal, silly entertainment, you can't do much better. — Forest Taylor

by Forest Taylor11/6/2018, 10:00 PM
Bohemian Rhapsody Hits All the Cliches of a Biopic
OverlordMovie Review