'Give Them Love and They'll Give It Back to You'

Even after becoming a success in New York City, Mike Karns never forgot his roots 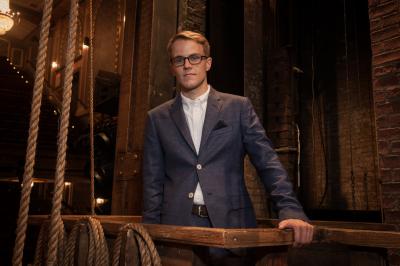 Erie has been fortunate as of late, we have seen several of our own go out into the greater world and achieve success at a national level. James Conner has had a strong showing early on with the Pittsburgh Steelers, Kayla McBride has had an amazing career in the WNBA. However, there are others who have not received the level of attention they deserve, such as Tony Award-winning producer Mike Karns. When those individuals find ways to give back to their hometowns, there are few better examples of the spirit of generosity.

Karns, who attended McDowell High School, spent many of his formative years at the Erie Playhouse, which had a significant impact on his later career. "The only reason I am where I am is because of the Playhouse. It gave me my love of theater and taught me so many of the fundamental skills needed to succeed in the business. David Matthews (former Playhouse managing director) introduced me to talent agent Jim Wilhelm when I was a senior in High School, and I ended up interning for him the summer after my freshman year of college. That job provided me not only some of the most valuable connections in my career, but also a glimpse at all of the other areas of theater that I could make a career in."

Karns would go on to Penn State and from there begin making a name for himself in NYC, not by being on stage, but by co-producing productions such as the Tony Award-winning Hadestown and Tony-nominated Ain't Too Proud. Mike is also the CEO of Marathon Digital, which has helped to grow the social media presence of many well-known individuals such as Iain Armitage and George Takei. Unfortunately, all of Broadway came to a screeching halt in 2020 due to COVID-19.

With new challenges however, come new innovations. The Playhouse will be launching two massive events in December, the first being "I Miss The Music: Broadway Salutes The Erie Playhouse," a massive virtual concert of Broadway stars that will rally together for the Playhouse on December 3rd, at 7 p.m. on the Playhouse Facebook page, YouTube, and the Playhouse website. The second will be a live drive-in performance of A Christmas Carol that will be done at the parking lot of Waldameer Park.

I asked Karns about how he came back to being involved with the Playhouse and his involvement with the upcoming events, he explained that, "When it became clear that Broadway was not coming back any time soon, my wife Kay (a Broadway actress in Hadestown) and I decided to move back to Erie to be with my parents. While we were here, and while I had downtime, I wanted to do something to support the Erie Playhouse, which I knew was struggling. So, I reached out to Kate Lechner (Playhouse executive director, and director of A Christmas Carol) about an outdoor drive-in version of A Christmas Carol that was happening in Atlanta and suggested maybe the Playhouse could do the same. Suddenly, we found ourselves mapping out the Waldameer parking lot and calling countless Erie businesses to join us to create this holiday event!  I had previously chatted with Julian Decker and Jim Wilhelm (both EP alumni as well) about doing a concert fundraiser for the Playhouse, and we worked together to enlist our friends and colleagues to create a special event that could do just that."

The Playhouse and its staff have been working tirelessly during the pandemic to not only provide entertainment but stay afloat. During that time, they have delivered several quality events, "I Miss The Music" will be no different. The concert will include over 40 Broadway stars, with Erie natives like Nick Adams and Eric Sciotto and musical theater greats like Brian Stokes Mitchell, Stephan Schwartz, and many more.

Karns spoke about creating these types of events during the pandemic, "My priority is always to understand the needs of the organization I'm working with. Then, from there, it's a matter of bringing together artistic minds who can create the overall flow and structure of the piece, which Julian, Jim, and Jeff Potter did for 'I Miss the Music.' From there, my team works to put all the pieces together into a cohesive concert. Julian and Jim really led the charge with the artist acquisition. A lot of favors were called in from personal friends, clients, and colleagues to participate, and we were so pleased that so many said yes!"

"I think everyone is pleased that so many can give back in this time of need as theaters across the country are sadly beginning to permanently close their doors." Karns expressed how important he feels it is that the Playhouse continues its mission. "Most importantly, I hope the people of Erie realize how influential the Erie Playhouse is in the artistic community. One of the oldest and most reputable community theaters in the nation, the Playhouse not only helps to foster arts within the Erie community, it also helps develop young artists who go on to have amazing careers in theater all over the country and on Broadway. My goal with helping the Playhouse is to use some of the skills and experience I've gained in my career to be a valuable ally and supporter as they work to continue their mission, even during this unprecedented time."

One final thought to leave everyone with from Karns, "In the words of David Matthews, they gave me love, and I hope to be able to give it back." Yes, the Playhouse has given Erie several lifetimes of love; hopefully, we can give some back.

I Miss the Music: Broadway Salutes the Erie Playhouse will be webcast live on Thursday, Dec. 3 at 7 p.m. Donations can be made at erieplayhouse.org // erieplayhouse.org/shows/i-miss-the-music-broadway-salutes-the-erie-playhouse

A Christmas Carol: A Live Radio Play will be performed Dec. 11-13 and Dec. 18-20 at 7 p.m. in the Waldameer parking lot, 220 Peninsula Drive. Tickets ($40 per car) can be purchased at www.erieplayhouse.org // erieplayhouse.org/shows/a-christmas-carol-a-live-radio-play