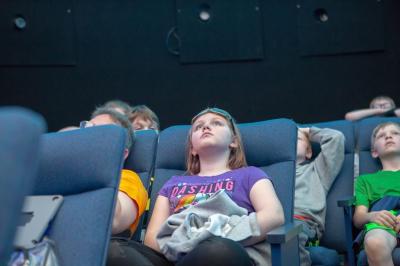 Penn State Behrend
The Forward! To the Moon program at Penn State Behrend's Yahn Planetarium will outline NASA's upcoming Artemis missions, which will look to establish long-term outposts on the moon.

If you have ever gazed up at the moon in wonder or thought, "How long until we live there?," the answer is: sooner than you might think.

This is thanks to the Artemis Program, NASA's latest moon exploration program and the subject of Forward! To the Moon at the Yahn Planetarium on Penn State Behrend's campus in the School of Science complex. Formerly known as the Erie Planetarium, the 56-seat auditorium-cum-theater, which projects the solar system and all its objects onto the domed ceiling, is where you can find the astronomy and physics majors, but it's also open to the public for events like Forward! To the Moon.

Jim Gavio, director of the Yahn Planetarium, states, "Forward! To the Moon will briefly talk about the Apollo missions from the 1960s and early 1970s, then compare Apollo with Artemis … the Artemis missions will be long duration missions where we will eventually have outposts on the moon, just as we do at the South Pole of the Earth." He continues, "Going to the moon will also prepare us for the longer journey to Mars."

The program, which began in October, has its first November showing on the fifth and runs every Saturday. It is recommended for ages nine and up. Gavio says, "I would like kids and adults to be inspired by these important and huge events that are unfolding during our time … The Apollo program inspired many young people to be the scientists, astronauts, and teachers of today, so we hope that Artemis will do the same."