Going to the Polls vs. Mail-in Voting

Why both are equally valid methods of exercising your right

by Jonathan Burdick
View ProfileTwitterInstagramRSS Feed
September 23, 2020 at 11:45 AM 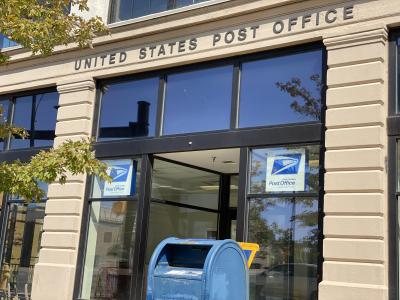 Last week, while taking my evening stroll, a discarded political mailer on the ground caught my attention. I stopped for a moment and knelt down to look closer. On it was a photo of Donald Trump, a fist triumphantly at chest level with his other hand high above his head gesturing number one. The mailer, which promised to put "America First" by "fighting for law and order" and "protecting us from the radical left" was addressed from the Republican Federal Committee of Pennsylvania out of Harrisburg.

"Support our great American comeback!" the mailer read. "Make a plan today to fill out one of the attached General Election Ballot Request forms."

The irony of seeing this mailer promoting mail-in ballots was not lost on me. My wife and I spent countless hours over the summer participating in nonpartisan mail-in ballot advocacy, sending out literally thousands of text messages and phone calls to Pennsylvania residents to inform them of their right to vote by-mail in the November election — made even more pertinent by the pandemic. We spoke with people of all political persuasions, working through any questions or concerns they had about the process and helping them apply for a ballot if they asked.

When we had agreed to the advocacy work, there were certainly some who were skeptical and had worries about mail-in voting, a natural reaction to any sort of change such as this. It was quite clear to me, though, when such skepticism transformed into seething rage and fury.

In May, President Trump began ramping up his rhetoric against mail-in ballots. He began by criticizing the process, often distorting the truth, and by June, his claims of mail-in ballots being a deliberate tool to promote fraud became nearly a daily talking point. Mail-in ballots were, he claimed, a way for Democrats to rig the election. He also began to claim without evidence that foreign countries would counterfeit ballots, never elaborating how they would be able to circumvent safeguards such as individualized barcodes.

"Most Trump supporters are like me — we trust Trump but no one else," Frank Miller, a 51-year old Pennsylvania business owner told Reuters in May. "When I see a Democrat pushing [mail-in voting], I know there must be a sinister reason for it."

"We are sending out hundreds of millions of universal mail-in ballots," Trump lied in July. In one tweet, he claimed mail-in voting would make for "the most INACCURATE & FRAUDULENT election in history" and even suggested that the United States delay in the election until it was safe to vote in person.

Sowing doubt in the process seemed to be the intent. Any truth about mail-in ballots became distorted among unsupported claims that spread unstoppably across social media. Many were confused about the differences between a ballot application, which they might have received in the mail, and an actual ballot. Some (but notably not many) Republican leaders pushed back against Trump's claims along with Democratic leaders. This included former Republican Pennsylvania Governor Tom Ridge.

"I think it's very sad and very disappointing that … the president seems to [want to] try and delegitimize the Nov. 3 election," Ridge said in June. "It just seems to me that this may be an indication he's more worried about the outcome than he's worried about fraud."

Ridge's assurances on the safety of mail-in voting didn't seem to have much of an impact for those who had already made up their mind though.

The lawsuits didn't help. In June, Trump's reelection campaign (along with members of Congress including U.S. Reps. Mike Kelly and Glenn Thompson) sued all 67 Pennsylvania counties over mail-in voting, calling it, without evidence, the "single greatest threat to free and fair elections."

The lawsuit would eventually be thrown out due to the campaign's inability to provide any evidence of mail-in voter fraud, but the doubt, the fears, that seething rage and fury had already ripped through every Pennsylvania county, fueled by social media, misleading memes, and the president's own tweets.

I probably shouldn't have been surprised then when, during my advocacy work, my wife and I were subjected to (mostly unprintable) obscenities that would have made Gunnery Sergeant Hartman blush. I began to document some of the responses.

"You're a scumbag liar," one man told me in one of the tamer hostile conversations. He added that I was going to receive a $500 fine for contacting him after he got in touch with the Department of Justice.

"What a bunch of s--t," one woman responded. "So easy to cheat and they will have no idea who fills them out and then who touches it in the mail. I hope people don't fall for this crap."

"We have seen time and time again, the Democrats cheat," another claimed, stating that the need to vote by mail was highly overrated and the pandemic was overhyped.

I heard a variation of "if you can go to Wal-Mart, you can vote in person" at least a dozen times.

"I do not support your attempt at voter fraud by fixing an election with Act 77, so shut up," another person said. "Lies, lies, lies!"

Act 77 was signed into Pennsylvania law by Governor Tom Wolf in October 2019, months before the pandemic. It codified no-excuse mail-in voting in the state and received bipartisan support in Harrisburg from local Republicans including State Sen. Dan Laughlin and Reps. Brad Roae and Curt Sonney.

"Compromise has given Pennsylvanians a modernized election code that preserves the integrity of the ballot box and makes it easier for voters to choose the people who represent them," Republican Senate Majority Leader Jake Corman said at the time.

Republican House Majority Leader Bryan Cutler echoed these sentiments, saying the bill was "not written to benefit one party or the other" and served to "preserve the integrity of every election."

How this had months later become so divisive and politicized baffled me, especially considering the Pennsylvania Republican Party's support earlier. In the midst of my advocacy, perhaps a bit worn down from all of the F-bombs being hurled at me daily, I messaged the Erie County Republican Party directly to ask their stance on mail-in voting.

"We are against it!" was their full response. I followed up, explaining that I had done it for the primary, that it appeared safe and secure and even provided online tracking of my ballot. I asked directly what their concerns were about mail-in voting. I didn't receive a response.

I reached out again this past week. I brought up the mailer that I had seen during my walk and asked if their position had changed. A read receipt showed that they read my message, but again, I didn't receive a response.

Journalist Matthew Rink has expertly been covering our local mail-in voting saga for the Erie Times-News. As early as 2018, long before no-excuse mail-in voting was legalized in Pennsylvania, he wrote about his own experiences in a neighboring state.

"Having spent more than 13 years in Ohio, a state with early voting, I've found Pennsylvania's electoral process to be rather restrictive, even arcane, since returning home last summer," he wrote then.

Rink also recently reported on how in the latest primary, "mail-in voting accounted for half of all ballots cast in Erie County with 21,795 Democrats voting by mail compared with 7,764 Republicans."

On Aug. 4, President Trump suggested that voting by mail was safe if you were doing it in Florida. "Whether you call it Vote by Mail or Absentee Voting, in Florida the election system is Safe and Secure, Tried and True," he wrote. "[I]n Florida I encourage all to request a Ballot & Vote by Mail!"

The reality is that mail-in voting is safe and secure and in states that have already been doing this for years, there is no evidence of widespread fraud. You can even track your ballot online throughout the entirety of the process. If you aren't able to vote in-person for whatever reason, you can request an absentee or mail-in ballot online at votespa.com or in-person at the Erie County Board of Elections office.

The deadline to request a ballot is Oct. 27, although it would be wise to request and send your ballot back (or drop them off at the election office or in the secured drop-box outside of the Erie County Courthouse) as early as possible.

Whatever method you choose, just be sure to vote.

Jonathan Burdick runs the historical blog Rust & Dirt. He can be reached at jburdick@eriereader.com.