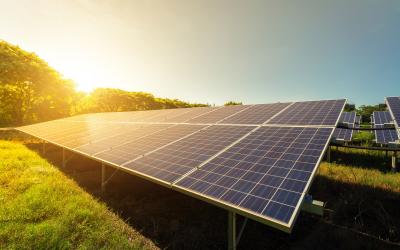 Climate statistics show, rather convincingly, that Pennsylvania (and the world in general) could use some cooling off. The average state temperature has risen approximately 2 degrees Fahrenheit since 1901, and average state precipitation has increased by about 10 percent in that time span, accompanied by a gradual uptick in extreme weather events.

The primary culprit, of course, is the glut of greenhouse gas emissions — most prolifically carbon dioxide — that trap heat in the atmosphere. It is because of this that Governor Tom Wolf established a GreenGov Council (headed by the state secretaries of the departments of General Services, Environmental Protection, and Conservation and Natural Resources) to systemically implement eco-friendly and environmentally sustainable practices into every level of the commonwealth's planning and operations.

GreenGov's main charge? To reduce net greenhouse gas emissions by 26 percent by 2025 and 80 percent by 2050. Alternative energy sources that produce net zero emissions are instrumental to achieving that goal. Solar energy shines especially well in this regard, and will thus be the focus of Pennsylvania PULSE (Project to Utilize Light and Solar Energy) — the largest solar commitment by any state government in the United States to date.

PULSE will construct seven solar arrays in six Pennsylvania counties (Columbia, Juniata, Montour, Northumberland, Snyder, and York) which will collectively generate 191 megawatts of electricity annually, fully powering 434 accounts across 16 state agencies — or roughly half of the Pennsylvania government. Once it takes effect in January 2023, the initiative will lower the government's carbon dioxide emissions by 157,800 metric tons a year — or the annual amount produced by roughly 27,000 homes or 34,000 cars.

Although the counties receiving the solar panels are predominantly concentrated in the southeastern portion of the state near Harrisburg, it represents the kind of bold action necessary to reverse our precarious climate course. That said, projects more immediately impacting Erie County have not been neglected in the GreenGov Council's plans.

They're collaborating with the State System of High Education to fund sweeping energy-efficiency upgrades to Edinboro University's Baron-Forness Library, including high-performance windows, upgraded mechanical systems, and rejuvenating its exterior facade. Presque Isle State Park is among the Western Pa. Parks and Forests that will receive part of $5.5 million in Guaranteed Energy Savings Act grant money to fund lighting, building envelope, and mechanical upgrades to state parks on our side of the commonwealth. Collectively, this project will produce an energy savings of $375,182 annually and remove 2,247 million metric tons of carbon dioxide from the atmosphere.

It's not always easy being green, but the long-term benefits should be well worth it.